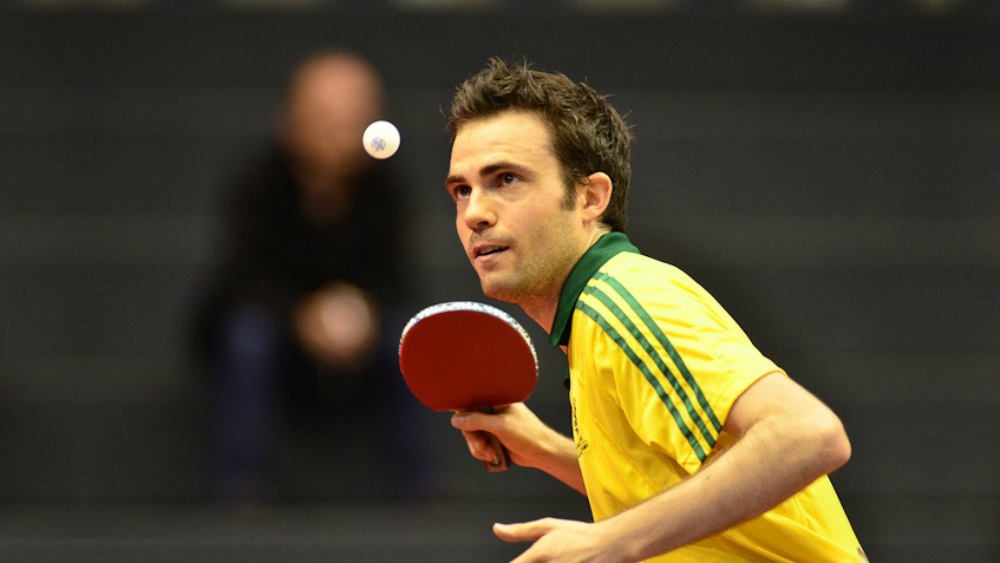 More so than any other racket sport, table tennis is a game that is dominated by spin. A Japanese study investigating the rotation speed of serves at the 2009 World Table Tennis Championships observed a top speed of 62.5 rps (rotations per second). That’s a lot of spin!

When a ball that is spinning at 62.5 rps makes contact with the grippy surface of your table tennis rubber, you better make sure you know in which direction that spin is occurring.

Is it topspin, backspin, or sidespin? Perhaps it’s a combination – like backspin and sidespin? Which type of sidespin (left or right)? There are a lot of questions.

If that introduction has confused you, please don’t worry – you’re not alone.

I receive emails from table tennis players every single day asking for help in particular areas of the sport, and how to read spin serves is definitely up there with the most common. Here are a few examples…

And that’s just a small selection! Clearly, learning how to read and return heavy spin serves is an area that a lot of players need help with.

Therefore, for the next couple of weeks, I’ll be doing just that. This post will teach you how to “read” spin serves in table tennis and then next week I’ll be writing about how to “return” spin serves.

How to read spin serves

When table tennis players and coaches talk about “reading” spin all they mean is being able to identify the type of spin your opponent has put on the ball.

For most strokes in table tennis, this is fairly simple. For example, if your opponent plays a big forehand loop against your backspin ball then it isn’t difficult to understand that the ball is going to have topspin on it.

Similarly, if you see your opponent push or chop the ball aggressively, you can assume the ball will have plenty of backspin – provided they have normal rubbers, of course.

However, “reading” or identifying the spin used on services is a bit more tricky, for the following reasons…

That’s why new table tennis players struggle so much with receiving serve. Only an expert is able to watch an opponent’s service action and instinctively know which type of spin has been applied. To the beginner, they all look the same.

But don’t get downhearted. There was a time when the expert player didn’t have a clue what was going on either. They weren’t born with the superhuman ability to “read” serves. They have simply picked it up from years of exposure to spin serves.

And even the experts get it wrong from time to time, especially when faced with a new serve from an opponent they haven’t played before. Check out the video below of Liu Guoliang (Head Coach of the Chinese National Team) getting bamboozled by a couple of serves from Sweden’s Par Gerell.

Par’s action is particularly deceptive and he generates much more spin than Liu Guoliang expects. Plus he’s left-handed, which always seems to make serves more difficult to read!

So, what is it exactly that separates the expert from the novice when it comes to reading spinny table tennis serves. The scientists like to talk about “advanced visual cues” and the ability of experienced players to subconsciously pick up on these and react according.

When applied to table tennis, it means that an expert will notice certain cues in their opponent’s service action that give away the type of spin that will be applied to the ball, while beginners are probably just watching the ball (oblivious to all the additional information available).

Learning what to focus on is the key.

But I doubt that many experienced table tennis players approached this in a conscious way. It’s not like their coach sat them down and said, “Listen here. What you need to look at when receiving serve is x, y, and z.”

Instead, they subconsciously learned what was important through trial and error. In my opinion, this is the best way to learn. To actually get out there and do it!

But they know it when they see it! That’s the important thing.

For me, the trial and error method of problem solving is ideally suited to learning how to read spin serves in table tennis. It may be true that experts are great at reading these advanced visual cues, but you want to develop that naturally and subconsciously. This was a big lesson I took away from teaching table tennis to Sam for The Expert in a Year Challenge. We were far too conscious and analytical in our approach.

So, stop searching for “the secret” and instead commit to spending some serious time receiving spin serves from competent table tennis players.

Probably the best thing you can do is find a player with good spinny serves and just ask them to serve to you for 10 minutes. Let them do whatever serves they like and then just play the point out – that should keep them entertained. Your job is the focus on the serve and return. The rest of the point doesn’t matter.

If they don’t want to do that then play a game. But again, don’t worry about the score. Focus on the serve and return.

You might think that you can’t learn very much from just playing points or games, but that’s totally wrong. Your ability to learn is based on your mental approach to the activity, not the activity itself. Even if you are doing multiball with the best coach in the world, you won’t learn anything if you are thinking about what you are going to have for dinner when you get home!

As you return your opponent’s serves, pay close attention to what happens to the ball. If it keeps shooting down and into the net then it clearly has backspin on it. If it is being dragged off to the left or the right then it is loaded with sidespin. If you find that you keep popping the ball up and getting it smashed past you then that serve has topspin.

A simple way to notice all the differences is to push every serve. You’ll do a good return to anything with backspin, the sidespin serves will probably be directed off the edge of the table, and the topspin ones will jump straight up. Keep paying attention to what happens and after a while, you should start to get a sense of what is going to happen when you push.

Don’t expect to pick it up completely after just 10 minutes against one player. You will need to repeat this exercise with a number of different players until you feel confident that you know when the ball is going to bite down off your rubber, or pop up.

A particularly kind opponent may even agree to just give you one type of serve but vary the spin. For example, they could serve 100% tomahawk serves but some are sidespin and topspin, while others are sidespin and backspin.

Alternatively, you could pay for an hour of private coaching and ask the coach to spend the time varying their serves in this binary way for you.

“But I’ve got nobody to practice against…”

So, what should you do if you can’t find anyone to practice against?

My advice is to download the Table Tennis Edge app. I wrote about the app a couple of weeks ago in my blog post The Best Table Tennis Apps and I really do believe it is the best thing to happen to table tennis in 2016!

There is a service section in the app where you can watch the serves of either Brett Clarke, Trevor Brown, or William Henzell, and you have to read the spin and select the correct option.I spent a lot of time on this when I first downloaded the app and the huge volume of

I spent a lot of time on this when I first downloaded the app and the huge volume of serves you can get through in such a short period of time means that you get plenty of repetition.

You also get instant feedback in the form of a smiley face or sad face. You can even set it up to give you a slow motion replay of the serves you read incorrectly – to allow you to see exactly what happened to the ball on contact.

I would be really interested in getting a table tennis novice to use the app extensively, until they are an expert at reading spin serves in the game, and then see how easily they can translate that ability onto an actual table. Another one of my “experiments”.

Another piece of advice would be to watch matches of professional table tennis players on YouTube, paying close attention to their serves. After a while, you will begin to become familiar with some of the most common service actions and the effects they have on the ball. We are truly blessed to have such fantastic access to elite level table tennis at our fingertips these days!

However, being able to “read” the spin on a serve is only the first step.

Once you’ve mastered that, you need to know how to “return” the spin serves. That means mastering some strokes like the push, the flick, the loop, etc. And I’ll be writing more about returning spin serves next week.