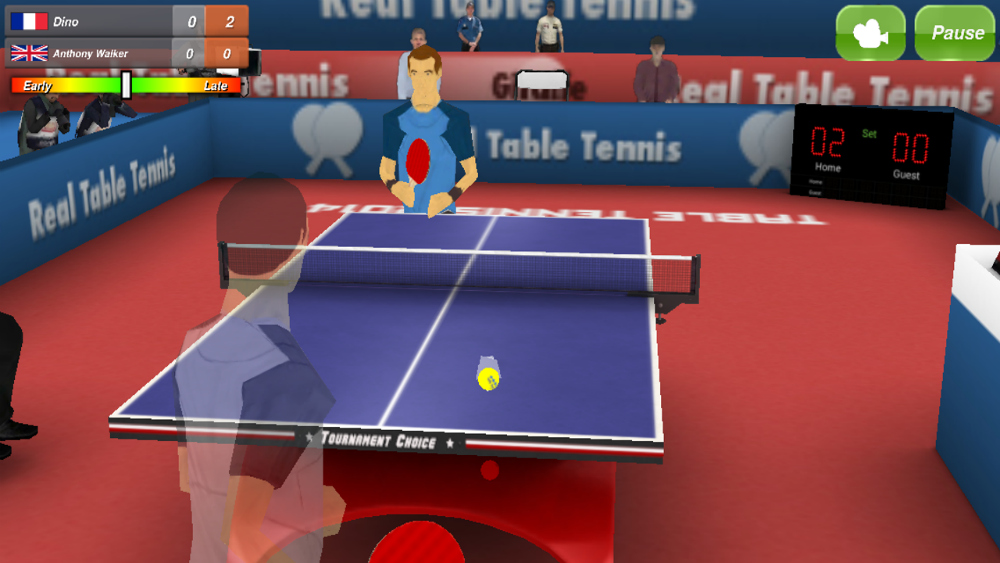 Ever since the launch of the iPhone in 2008, apps have taken over our lives. It’s got to the point where many people are giving up on computers and laptops completely and instead doing everything via apps on either their smartphone or tablet. It’s taken a while for this app revolution to reach the world of table tennis but now I feel like it’s time to share with you some of the best table tennis apps.

As an Apple user myself, I have to admit that I’m not very familiar with the Google Play Store or the Android operating system. However, I will do my best to cover everything that is available, in both stores, for all devices.

So, without further ado, here are the best table tennis apps…

This is without a doubt the best table tennis app available. In fact, I think it’s the best thing to happen to table tennis in 2016! The Table Tennis Edge app, created by the Australian-based ttEDGE team of Brett Clarke, William Henzell and Trevor Brown, is taking table tennis training to the cutting edge of science.

So, what does the app actually do?

Table Tennis Edge is a “brain training” app. But it isn’t training your brain with puzzles or words, instead, it is training your visual processing speed for table tennis success.

To find out more, I recommend checking out the short video below that explains some of the science behind the app and shares the results of initial research on its effectiveness.

Currently, the app is split up into three modes; serving, multiball, and games…

The serving mode gives you the opportunity to observe and read the high-level spin serves of Brett, William and Trevor. There are eight different serves to choose from and your job is to correctly identify the spin on the serve. Learning to read spinny serves is one of the most difficult aspects of table tennis and I believe the repetition and instant feedback provided by the Table Tennis Edge app will go a long way to helping players master this crucial skill in record time.

The multiball mode gives you the chance to working on your directional cues by anticipating the ball position (left or right) of incoming shots. Again, there are eight options available, including a combination of strokes. Brett and the team do a great job of varying their technique so that the direction of some strokes is quite textbook and obvious, whilst others are a bit more tricky and deceptive.

The games mode is the flagship section of the app and is such a brilliant idea. It includes a 12-step pathway from beginner up to the Table Tennis Edge Cup. Along the way you need to beat Brett, Trevor and William on the beginner, intermediate, advanced and extreme setting. As you can imagine, the speed at which you need to make a correct decision is ramped up at every stage. I found it easy on the beginner and intermediate levels but I am currently stuck at the first match on the advanced level.

I absolutely love this app. I wish it had been around when I was a kid because I’m sure I would have spent ages on it and improved my table tennis much faster.

Completing the app is no simple task. I’ve spoken to Brett Clarke and he has informed me that the app has been downloaded by over 25,000 players but has only been completed by three of them – and one of those is Brett himself!

So, I challenge you to download the Table Tennis Edge app now and see if you can join the exclusive club of players who have managed to win at every level and walk away with the cup.

The Table Tennis Edge app is available as a free download on the iTunes App Store and Google Play Store. The free version gives you access to two serves, all the multiball options, and the beginner level of the games.

If you enjoy the app and find it valuable you can then pay for full access. The price varies by location but in the UK it cost me £7.99 on iTunes – which I think is really good value when you consider how much time and money has gone into creating the app and the fact that this is clearly the best table tennis app available.

There are so many different table tennis games apps to download that choosing one can feel like a minefield. You would use up all of the storage on your phone if you decided to download them all before selecting your favourite. Thankful, one app really stands out as a cut above the rest; Table Tennis Touch.

I also like that the game has been designed with table tennis players in mind. Instead of playing matches in some kind of stadium the tables are located in sports halls (see above) or other random looking halls. It’s just like the kind of venues you play league matches in! They’ve even teamed up with Bounce, the ping pong bar in London, to create an arena that feels like you are playing right there, on the Olympic table.

The app is only £2.29 to download in the UK and is really well made. Check it out. You won’t be disappointed.

You can find out more information here.

Over the last few years, the Polish Superleague has become one of the most competitive table tennis leagues in the world, attracting a number of big name players. If you have an Android device you can download the official app and watch the matches live!

Table Tennis Superliga LIVE also includes match reports, a live score feature and highlights. You can also view the league tables and a load of other stats.

Unfortunately, the app isn’t available on iTunes (I have no idea why) which is a shame because I probably would have downloaded this myself. I hope that other national leagues create these kinds of apps too. It would be brilliant to have a Bundesliga app or a Pro A app for live streaming of the French league.

Hudl Technique, formerly known as Ubersense, is a slow-motion video analysis app. You can use your smartphone or tablet to record yourself playing table tennis and then break down your technique for instant feedback during practice.

I think these kind of apps are brilliant and even though very few table tennis coaches are using them at the moment I’m convinced that in the years to come that is all going to change.

The next generation of table tennis players will have grown up expecting technology to be part of everything and will want to receive instant feedback and analysis when trying to learn a new technique. They will also be much more interested in downloading and sharing videos of their training or matches with their peers.

And it’s not just beneficial for the players. I’ve found that when coaching it can be quite difficult to convince a player that they are performing a certain technique incorrectly. However, record them for a few seconds and let them watch it back, and you’ll both be able to see the problem and discuss what needs to change.

Coach’s Eye is a very similar app to Hudl Technique with almost identical features. If I’m honest, I’m not sure which one is better out of the two. However, Hudl appears to be a much more established company with lots of other products and services for sports coaches and teams.

This one isn’t strictly a table tennis app but it is one that I believe all serious table tennis players should download. The “7-minute workout” is an exercise routine and is supported by comprehensive research into the effects of high-intensity circuit training on health and fitness.

Researchers have selected 12 exercises that are performed for 30 seconds with 10-second rest intervals. This high-intensity training with little rest results in higher daily metabolism and is the equivalent of working out for over an hour – for only slightly longer than 7 minutes.

The best part? The exercises are simple to perform, do not require any equipment, and therefore, can be done anywhere! This app guides you through the workout and allows you to track your results.

I know that many table tennis players struggle to find the time to work on their physical training and end up neglecting it. This app is a great way to squeeze some high-intensity cardio into your daily routine and hopefully, your table tennis fitness will improve in the process.

7 Minute Workout Challenge is available on iTunes and Google Play for roughly £2.50!

What have I missed?

If you’ve got a favourite table tennis app on your phone or tablet that isn’t currently on this list then please leave a comment below and let me know about it. I will then add it to the list and give you credit for discovering it!