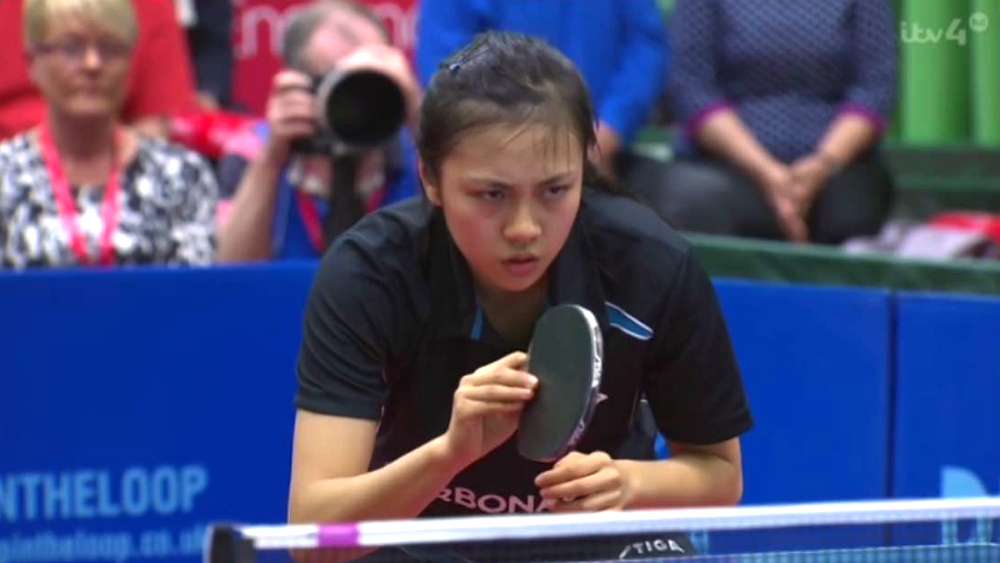 You may have heard other table tennis players talk about being “in the zone” during a match where they played particularly well. Perhaps you’ve even experienced it yourself. But what does it mean and how can we get into this often elusive “zone” more often?

In this blog post, I will share some of the current research on this topic and use Tin-Tin Ho’s performance in the final of the women’s singles event at the recent English National Championships as an example.

The zone is, “A peak state of mental functioning where you are entirely focused on the task at hand and, therefore, able to perform at your highest level.”

This sensation has been given many names, the other most common being “a state of flow” which was coined by Mihaly Csikszentmihalyi, a Hungarian psychologist.

When you are “in the zone” you are likely to experience a much greater awareness of what is going on. It can even feel like things are moving in slow-motion giving you ages to read the situation and respond correctly. All of this leads to far greater performance than usual.

In table tennis, this is often experienced as the feeling that you “can’t miss”. Every shot you play, no matter how aggressive/risky, is played perfectly. You give away no errors or mistakes.

You are most likely to enter the zone when you are being pushed to the limits of your ability. For example, when playing a complete beginner you could probably beat with your eyes closed, you aren’t going to be in the zone. The same is true if you find yourself up against Ma Long. If the result is basically decided before the match even begins, you aren’t going to end up in the zone.

I was reminded of the importance of being “in the zone” whilst watching the women’s final of this year’s English National Championships. The match was between #1 seed Kelly Sibley and #2 seed Tin-Tin Ho. Tin-Tin had never beaten Kelly before. She lost 4-2 to her in the final last year.

I’ve known Tin-Tin since she was about 6 or 7 years old and I really wanted her to win. She lost the first set 11:5 – and I feared Kelly was simply too strong and experienced – but bounced back to take the second set 11:9.

Unfortunately, the third set didn’t go her way at all and she lost 11:3. It was at this point that I started to worry that she was going to have to settle for second place. Perhaps she was too tired from all the matches she had played over the long weekend in the U21s, women’s and mixed doubles, and now the women’s singles.

But, in the fourth end, Tin-Tin came back to the table looking like a changed player. Her face was different. Her gaze had narrowed. When receiving serve she was practically frowning at Kelly. She looked strong. She looked “in the zone”.

“She’s going to win this!” – I started calling out to Katie (my wife) who was in the other room.

Tin-Tin was still 2-1 down in games but I could see it in her eyes. She had decided this was her match – her title.

Don’t get me wrong, it wasn’t easy. Tin-Tin won both the fourth and fifth sets 11:9 to give herself a 3-2 lead. But by the sixth game, you could see that all the momentum had swung over to Tin-Tin. She had a response for everything Kelly could throw at her, and her eyes stayed squarely fixed on either Kelly or the ball.

She won the sixth game 11:6. Her first win against Kelly and her first women’s singles national title – the first of many, I reckon!

The reason Tin-Tin is such a great example of being “in the zone” is that off-the-table she is such a relaxed and happy person. When I interviewed her for the podcast she was laughing about how embarrassed she gets looking at pictures of herself playing where she looks so angry and serious!

But she couldn’t have won that match while maintaining a happy-go-lucky mindset and appearance. Watch a top performer playing their best in any sport and you’ll see that they all look the same – serious, focused, stern.

How to get “in the zone”

I guess the big question now is what did Tin-Tin do to get “in the zone” during arguably the most important match of her career so far. She could have easily “choked”, underperformed, and let Kelly walk all over her. But she didn’t. She was able to play her best table tennis when it mattered most. How did she do it? I’ll let Tin-Tin explain…

I find it’s best to use the situation to your advantage. The National Championships is the biggest domestic competition of the year so I tried to use that to motivate me to play the way I knew I was capable of.

It’s easy to let the circumstances effect your performance via nerves or negative pressure – I have experienced this too many times in the past few years. Therefore, I knew that if I entered the match with a negative mindset there would be no point even playing, as I would make lots of unforced errors for sure.

I think the most important thing is to just focus on how to cause problems for your opponent. If I missed, I didn’t fight with myself. I just stayed positive. I asked myself, “How can I fight with the opponent if I’m fighting with myself?”

Thankfully, this helped me to find a way to start to play really positive table tennis. Naturally, when my mind is sharp I am able to play with more variation without having to think much about it.

From speaking to Tin-Tin it would appear that, for her, two aspects were key…

Before the match had even begun Tin-Tin had decided to use this potentially intimidating situation to her advantage. She found a way to approach the match with a positive attitude instead of a negative one. This is much easier to said than done, but it’s vitally important if you are to have any chance of getting “in the zone” and playing your best table tennis.

Tin-Tin used the pressure for motivation. She turned it into positive energy. This helped her to focus and enter “the zone”. She took control of the pressure and nerves of the situation by viewing it as potentially helpful to her performance. She could use it to play her best table tennis.

The alternative is the view the pressure as a negative. Something to be scared of. If you start worrying that you will be embarrassed if you lose in front of all these people and on live TV, you are allowing the pressure to become negative energy.

So, I believe that Tin-Tin did a lot of the work required to get “in the zone” prior to even stepping onto the court. It was all about her positive approach to the match. She viewed it as a challenge to be taken on rather than something scary and dangerous.

During the match, there are a number of different variables you can choose to focus on…

It’s funny because you could assume that the best way to get “in the zone” is to focus on yourself. Maybe you need to psyche yourself up, or use some special breathing techniques, or go through some sort of routine/superstition. I’m not saying that stuff doesn’t work – and if you read other articles online about getting in the zone these are often mentioned – I just feel like us table tennis players can often become too internally focused.

Tin-Tin wasn’t particularly worried about how she felt. I doubt she was actively trying to get “in the zone”. Instead, she focused on something else and getting “in the zone” took care of itself.

I hope that’s given you something to think about for your next league match or tournament.

When you find yourself in a high-pressure situation, where you need to play your best when it matters most, remember to turn the stress/nerves into positive energy before the match. Use it as motivation to play your best. And then during the match focus on making life difficult for your opponent.

It’s your job to beat them, and that can be achieved by making them play bad as well as playing great yourself. At the table, you aren’t “friends” with the player on the other end. Your goal isn’t to have a “good” match. You should be trying to beat them. The best competitors understand this. They treat each match like a battle. If you don’t kill your opponent, your opponent is going to kill you!

In Tin-Tin’s words, focus on “causing problems for your opponent” and you’ll be most likely to get “in the zone” and win.

If you’ve enjoyed this article, please head on over to my Table Tennis Coaching page which contains an article of all of my coaching blog posts.