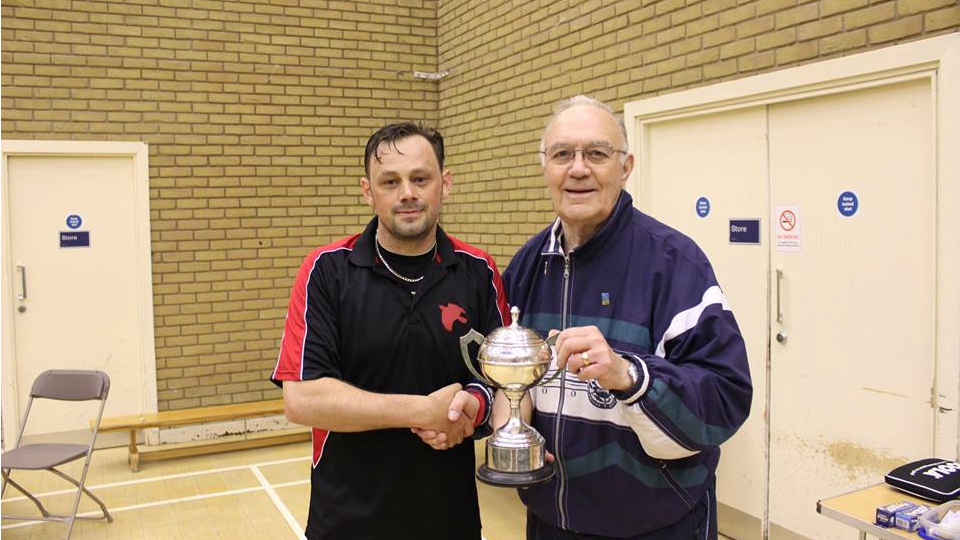 From time to time I like to share with you one of the many emails I received from table tennis players describing and explaining their progress in the sport. I find it really inspiring to hear about the experiences of Expert Table Tennis readers in their quest for table tennis expertise and I hope that by sharing them on the blog they will help others on their journey.

Today’s “player profile” is of Henry Arthur, who I was fortunate enough to meet at the Nottingham Grand Prix last season while I was doing the rounds with Sam. He has dedicated a lot of effort to his table tennis over the last few years and is seeing the hard work pay off in his results and ranking. Over to Henry…

I really enjoyed listening to the podcast with Rory Scott and it kind of links into my own experiences so I thought I would share them with you. My name is Henry Arthur (I’m the guy on the left in the photo), I’m 39 years old and I live in Corby, Northamptonshire.

I started playing table tennis when I was about 13 or 14 but never really had any coaching. It was just something else to do when I wasn’t playing football or cricket. After a serious accident in 2008, when I was 33, I had to take 2 years out of all sport to recover. During my recovery, I started searching the internet so I could start talking to people on sports forums since I couldn’t really get out of the house. This was when I discovered forums such as TableTennisDaily and the now-defunct Table Tennis Talk, as well as websites such as PingSkills and Larry Hodges’ TableTennisCoaching.com. I also came across your Expert Table Tennis site.

As someone who had never taken the sport seriously, and coming from a small table tennis club, I was unaware of the larger table tennis community out there. I thought table tennis pretty much started and finished at local league level! Prior to my accident, my playing ability meant that I was a yo-yo player between the top 2 divisions in my local league, normally managing about a 20% average in the Premier Division. On our local league ranking list, I would be ranked about 40 and on our County ranking list I would be ranked about 60. Obviously, I didn’t have a national ranking as I wasn’t even aware that Grand Prixs, British League, etc. were out there.

Getting the table tennis bug

As my body recovered, I decided that I wanted to challenge myself and get a taste of the British League experience. I organised a team and we entered the British League for the first time in 2012/13, being placed in Division 5 (North). I would like to say that it was a successful season but, playing in the number 2 position, I won just two matches all season! However, I had the bug and wanted to improve.

My goals at that stage were:

To do this, I realised that I needed to get some quality coaching and so I searched out a coach who lived fairly locally and played and coached at a high level. I also decided that I needed to play more players (you get too used to playing the same players year in, year out) and so signed up to play in a 2nd local league on a weekly basis and also as a reserve in a 3rd league! Due to other commitments, especially financial, I could only afford to have one hour of 1-to-1 with my coach each week but I did this just about every week for nearly 2 years. This came to an end in December 2014 when he was taken ill and it’s now 7 months since my last session with him.

The 2013/14 season saw me improve my average from around 20% to just over 50% in my main local league and my league ranking went to a career high of 19 during that season, though I finished the season at 24. My county ranking improved to 26 at one stage before slipping back to 35 by the end of the season – still a major improvement on my usual position of around 60. I also played in my first ever Grand Prix tournament when I entered the Nottingham GP. I finished 2nd in my Band 6 group but was knocked out in the next stage, and finished 3rd in my Band 5 group, winning one and losing two matches. We didn’t enter a team in the British League that season.

As well as playing in Division 4 British League, I entered the Liverpool and Nottingham GPs (and I bumped into you and Sam). At the start of the season, I had 713 rating points and by the end of the season I had 910, a gain over the season of 197 points. I was pretty pleased with that! Looking at my British League record, I have improved from winning two matches all season in Division 5 in 2012/13 to hitting 66.7% in Division 4 just two years later!

Reflecting on the last few years

I’m really pleased with my improvement over the past few years and I put it down to four things;

The combination of improving the technical side of my game with a coach and learning the tactical side through plenty of matches has had a big effect. I also feel like getting involved in coaching the sport has further added to my knowledge and personal development as a player.

My goals for this coming year are very similar though I need to find a new coach. I want to get into the top 10 on my local league ranking list and top 15 on the County list. I’m also aiming for a 75% average in the local league. We have been placed in Division 3 (Midlands) for British League this year, compared to Division 4 last season, so it will be tougher but I’m looking forward to playing better players and of course, any wins I get will likely be worth more ranking points on the national list. I will also be entering a couple of Grand Prixs again. Last year I played in Bands 4 and 5, but I will be playing in 3 and 4 this year due to the changes. Again I am looking forward to the challenge and any wins I get will be worth more ranking points.

I turn 40 in December, so this is my year to hit the veteran stage. I fully expect to be selected to play for one of our County veteran teams this season – so that goal will be hit – and as this was my main goal when I started my journey three years ago, I’m quite happy with my success. My next aim from a local league perspective is to win our closed tournament, having only ever got out of my group three times in 20 odd years with my best performance being a quarter final appearance.

So, whilst these goals may not be at the same higher level of Rory’s ambitions, it does go to show that even by just getting one or two hours of quality practice and coaching a week, big improvements can be made to someone’s game no matter what age they are.