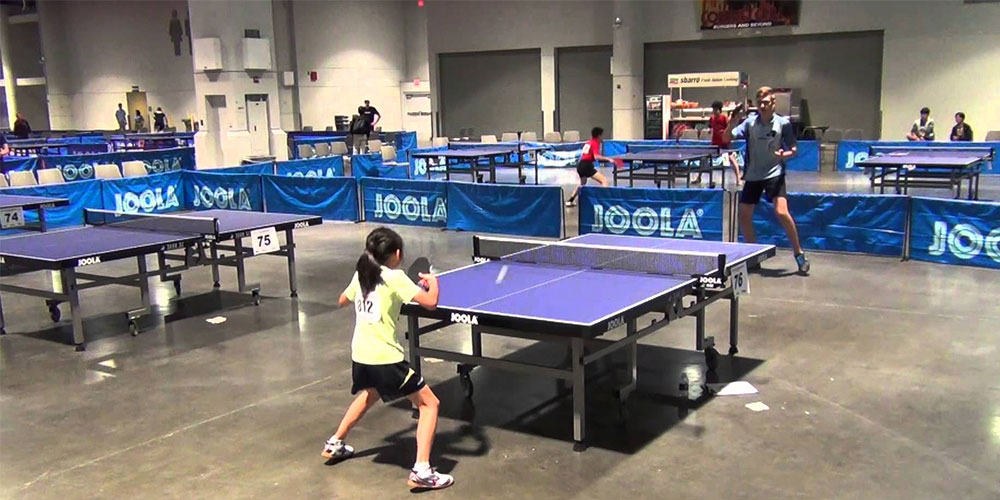 This is Episode 027 of the Ask a Table Tennis Coach podcast. Today’s question comes from Vincent and is all about how to play against a highly coached young player.

“I’m a little bit embarrassed to ask this but what are your best tips for playing against children or young teenagers? Think of a 10 year old boy who already has very technique on both sides, good touch, can serve properly, etc… If they feel comfortable against you and can hit all their shots relaxed, it can be really hard to beat them.”

Well, Vincent, I guess in the majority of sports a half decent adult would expect to beat a 10 year old pretty easily. But table tennis isn’t really like that and a much more level playing field. There are probably 10 year olds in china that could beat most of the top English players except for the few that are right at the top.

Age isn’t really that much of a factor if they have had loads of coaching and training then they are really decent players. Even a tiny 10 year old is able to beat a recreational adult player quite easily.

Back in the expert in a year challenge on our first trip up to Swerve in February Sam played against a 10 year old called George and he lost that game. I put that video on YouTube and that kind of sums up the year I think. It’s quite disheartening losing to these young kids. But if they’ve had good coaching and they’ve been playing for a couple of years they can actually be pretty good.

So we know how it feels and I hope this podcast will help all of those players that come up against young players.

Instead of sharing my own thoughts I’m going to summarize some of the best advice that was given to Vincent by some members of the Expert Table Tennis Academy in the Facebook Group and in the end I will wrap it up with my thoughts. Here are some of the best tips that I think were given.

Mike said, “Most youngsters like to play at 100 miles an hour, so it might be a good idea to slow them down.”

Peter said, “They don’t seem to like spin, especially heavy side spin.”

Yenz commented, “If they’re up and coming they’ll be used to playing fast with all the standard machine table tennis strokes or by the book. So it’s time to get out all of your strokes that are a bit or a lot strange. And remember there’s no reason to feel sorry if you win because in a couple of years you most likely won’t have a chance against them.”

Nick said, “Spin and varied pace and placement. They will learn a lot from that. So try to vary what you’re doing.”

Steve replied, “In a rally the best weapon is variations. Invariably they are taught to play the same shots against the same ball coming at them. If they don’t know where the ball is going or what spin is going to be on it then queue head explosion and tears when the shots start missing and they don’t know why. The ones that can keep their head and work it out and adapt, they’re the ones that are going to be the good players.”

Roger said, “Vary your serve or at least 10 different places on the table to serve to and 5 different spins. So that’s 50 variations. Then you add in a bit of disguise and there are hundreds. It’s surprising how many youngsters serve at the same place on the table.”

Louis said, “10 year old kids can have some good mechanical skills, but there are very few of them that have great strategic thinking. So you have to work to be good enough to keep the ball on the table, moving it around, then you can defeat them with better strategy. So just change the pace, force them to push balls trying to attack first, finding good places to block to and attacking their weaknesses. There are loads of things you can do there. It’s no use to try and get into drive to drive rallies with them, especially if you’re new to the sport because their mechanical skills will be a lot stronger than yours will.”

Marcus who is the father of a young player said, “A very good option is to play long and high as most kids are not that good in judging variable depth and they tend to be too eager to hit the ball. So a higher ball is often returned to you high. They get coached with loads of low balls so that could be quite a good idea.”

Simon suggested, “You have to take each kid as you find them, it’s not different to playing an adult. Work out their weaknesses in the first game and then maybe you might want to use angles and try serving short, backspin or sidespin. Just treat them as they come.”

Lastly Christina said, “Long backspin mixed in with float serves seems to do the trick. But whatever you do, don’t take them on counter hitting if you’re older.”

To summarize here are some of the things that stood out or got mentioned a few times. Be very clever with your serves when you’re playing kids. Try and vary the speed, placement and spin and make an effort to disguise them too so that they are more difficult to read.

Definitely don’t get stuck in fast and flat counter hit rallies as that is the bread and butter of kids. It’s something they do all the time so you’re going to struggle to beat them at that.

Use your brain, use some tactics and strategic thinking. You’re probably going to be better at using tactics and identifying weaknesses than they are. Most 10 year olds are just going to play and not think so much so use that to your advantage.

Also remember that there’s nothing wrong with doing a few weird and unorthodoxed things now and then. See if that works and if it can mess them up a bit. If it doesn’t, go back to your normal game. If it does you can keep doing that every now and again.