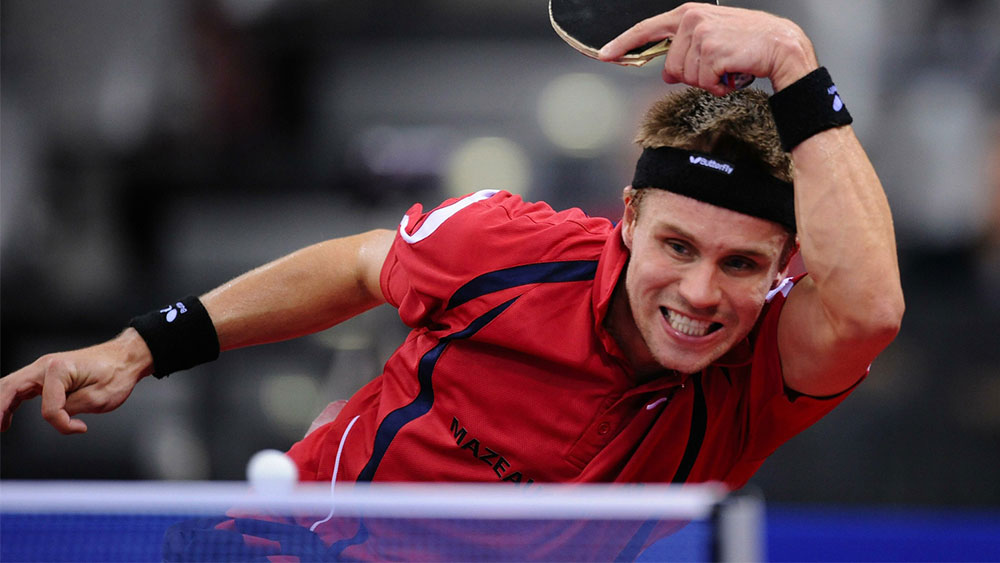 This is Episode 003 of the Ask a Table Tennis Coach podcast. Today’s question comes from John and is all about how to return balls with heavy sidespin.

“What are the rules for returning a ball with a lot of side spin, do you spin the same way or the opposite way?”

Well John the first thing I want to say is that there are no rules in table tennis, it’s a sport where you can be creative. Of course there are some things that are best practiced, so for example if you’re given a long ball most people would say “You should try to loop that ball” but sometimes the best return is the least expected return and in this case there are actually lots of different ways you can return a heavy side spin ball.

So if you’re a beginner what you might want to do is actually just angle your bat in a certain direction to the left or to the right and then just let the spin do the work to get the ball back on the table. Now advanced players will want to do what John said, they really want to play a heavy spin shot themselves kind of going with the spin or going against the spin.

What does that even mean, ‘Kind of going with the spin’ or ‘Going against the spin’? Well if you imagine a bicycle that’s upside down and one of the wheels is spinning you can either continue trying to spin the wheel in the same direction that its going and try to speed up the speed of the wheel or you can try to go against the spin so spin it the other direction by quickly brushing your hand over the top and making it go the other way. That’s kind of what’s happening in spin in table tennis, sometimes you’re going with the spin other times you’re going against the spin.

If you think of just a standard top spin to top spin rally where both players are top spinning, even though the ball is always top spin the spin is actually changing every shot because as its coming towards you it’s kind of spinning towards you and then it is where you play your top spin you change the spin its now spinning the other direction. So that would be like spinning the bicycle wheel one way and then trying to quickly spin it back the other way. The spin is actually constantly changing and that allows the ball to kind of really sink in to the bat and then you to get power in the spin to send it back.

So often you will want to change the spin. Let me run through some examples for how to deal with heavy spin balls in table tennis, I think that would give you slightly better ideas:

What you’ve seen a lot recently is lot of players using reverse serves and even if you’re going back to using back hand serves you think of Dimitri. So to deal with that we’ve seen huge amount of reverse banana flicks kind of back hand banana flicks coming in and what’s happening there is that the reverse serve has got the ball spinning one way so if you were coming to look down on the ball from above the ball or be spinning in a anti clockwise direction and then that banana flick comes back and then spins it with sides spin the other way.

So that’s one way to kind of, I guess in a same way when you’re looping a top spin you’re going against the spin that’s got the ball spinning one way and then it doing an aggressive banana flick and then spinning it back around the other way. Just intend it being top spin it’s kind of coming at it from the sides from one side spin to the other side spin.

An example where two players are both going with the side spin would be something like a loop to loop rally using the forehand where both players are kind of really hooking around the side of the ball. So if you can picture that sometimes you’ll see players doing the thing where they go around the table so they start central and they get more and more to their right, they’re both getting closer to the net and then you’ll see some videos where they even manage to get round the other side so they switch sides and they’re hitting the ball on their own side and that kind of thing. That’s where both players are actually spinning the same way around so they’ll both be spinning the ball in an anti-clockwise direction if you were to look down from above and the ball is getting more and more side spin on travelling the same direction. So that’s what happens when you go with the spins.

Let’s say you’re receiving a side spin serve for example where you have to twist. You either want to go with the spin or against the spin. It’s probably good to do both just to kind of to mix things up and make sure that your opponent is always guessing. If for example you’re to play a powerful spinning loop I think lots of players find it easier to do that than going against the spin. Like kind a backhand banana flick that’s gonna allow you to really grip in to the ball and play back a strong shot. If you’re going with the spin you might be doing more just kind of  guiding it round doing a short little bit of wrist to try to keep the spin on the ball.

I think the key thing here, and this is really important, is to think about brushing forward on the side of the ball instead of brushing to the side along the back of the ball. Even though with side spin you don’t necessarily want to be brushing side to side what you can do is, if you imagine the forehand hook loop, what’s happening when people are playing that forehand hook loop is they’re not putting side spin by hitting the back of the ball and brushing across to the side. What they’re doing is they’re swinging their arm really back and forwards and they’re brushing along the side of the ball and that’s kind of the way that you want to think about it when you’re going with or without the spin just kind of which side of the ball the left or the right side are you brushing forward. I hope that I helps.