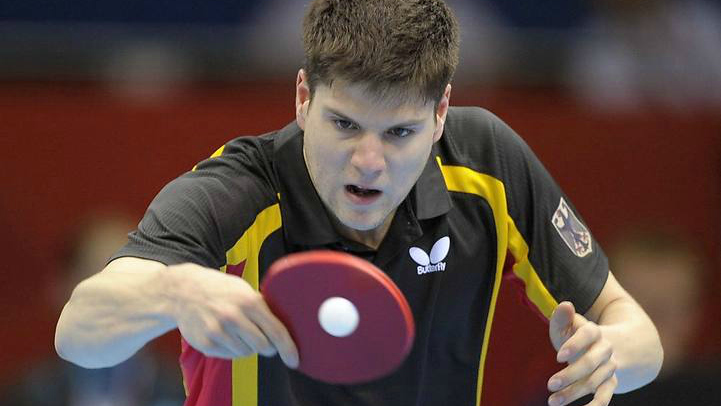 Over recent years, the backhand loop has become more and more prominent at the highest levels. Gone are the days when players only loop with their forehand and block/flat hit with their backhand. Penholders have developed the reverse penhold backhand, two-wing loopers are everywhere, and elite player are even receiving short serves to their forehand side with a backhand flick (who would have seen that coming twenty years ago).

This post will go through all the technical aspects of how to play a backhand loop in table tennis. I’ll also give you some coaching tips and training ideas to help you practice and progress with your improvement. As with all aspects of table tennis, learning the backhand loop isn’t easy and will require a serious investment of time. However, once you’ve mastered the action it should be like riding a bike, and you’ll never forget the flowing wrist movement and timing ever again.

Your stance should be similar to that of a backhand drive.

The muscles in your legs should be activated, providing your with a solid base and enabling you to move and adjust your position if you need to. Your center of gravity should be low with your upper body being crouched or slightly hunched. Allow your shoulders to drop and relax. This contrast between the upper body and the lower body is key in my opinion.

In terms of your positioning, if you are right-handed you want to get your left hip behind the ball. It is more natural to play a backhand loop towards the left side of your torso.

You also want to get relatively close to the ball so that you don’t need to reach too far forwards (this will make it more difficult to get power from your arm and body, and also cause you to lose some control), or have to let the ball drop too much before getting to you (standing too far back is the main reason why some players take the ball too late).

The easiest way to describe the backhand loop technique is to imagine yourself throwing a frisbee. That means it requires a lot of wrist flick, a bit of extension from the elbow, and some rotation of the shoulder.

It is really difficult to explain the movement correctly with words alone, so at this point I’m going to hand over to Brett Clarke of ttEDGE and his fantastic backhand loop tutorial video.

I particularly like the common mistakes section and demonstrations as these make it really easy to self-diagnose problems you may be having. Thanks, Brett!

Where I disagree with Brett

Brett’s final common mistake was, “14. Going in circles”. In the video, he goes on to use a massive circular motion to exaggerate the movement, with his bat and arm ending up way over to the other side of his body for the follow through and finish. This is clearly an iffy way to play.

However, I do like to coach my players to use circular motions on their forehand and backhand topspin strokes, where it appears Brett goes for the one dimensional back and forward technique where the swing moves in both directions along the same line.

I believe if you look at top players playing their loops you will notice that they make a narrow circle with their swing. Below is a slow-motion video of Ma Long’s backhand loop and you can clearly see that the forward part of the swing happens to the left side of his body while the backswing and prep occur on the right side. He is making a small circle and I prefer this swing to the straight back and forward one demonstrated by Brett as I believe it allows for constant movement which makes the swing smoother and less ‘stop-start’.

I was taught this circular backhand technique by Lei Yang (technical coach of the German National Team) while I was training in Denmark last summer and it went a long way to improving my backhand loop and open-up. I just felt so much nicer to have the arm and bat moving constantly and a recovery/backswing on the right hip (instead of the left) makes it much easier to switch between backhand and forehand strokes than going back along the same line as the forward swing.

How to practice your backhand loop

When you are learning the backhand loop it can be great to start off with multiball or playing against a robot. This will give you a chance to relax, not worry about making mistakes, and focus on the swing.

Once you are getting the hang of it you will need to find a practice partner who can block your loops. Practicing in a rally situation will help you to learn how to adjust to the ball coming to slightly different positions. It also a great opportunity to start working on the own consistency and accuracy. Ideally you should be able to play about twenty backhand loops in a row without a mistake.

Then it’s time to make things a little more complicated. Perhaps start with an exercise such as one backhand loop, one forehand loop. This is an opportunity to practice the shot outside of isolation. You can also trying using your backhand loop in a few more regular and irregular drills. Another option is to ask someone to serve long to your backhand so that you can practice backhand looping their serves. You should think about looping to different positions too.

Basically, there are loads of things you can try out to make it more difficult. Remember that learning is a long process and just because your backhand loop looks good against the robot doesn’t mean that you have mastered the backhand loop. You should want to ‘overlearn’ the shot. By that I mean do so much of it that it is close to perfect in every possible situation.

Crank up the power

Start rotating your waist into the shot.

Elite level player may even stand with their right foot slightly forwards when playing a big backhand loop to give themselves a little more space to swing on their left side and also to rotate their waist into the shot as they make contact.

So, that’s everything you need to know to start learning how to play a backhand loop in table tennis. For more technique tips check out the following articles…

I hope this post has helped you. If you need any help with your backhand loop, or have anything to add, please leave a comment below.