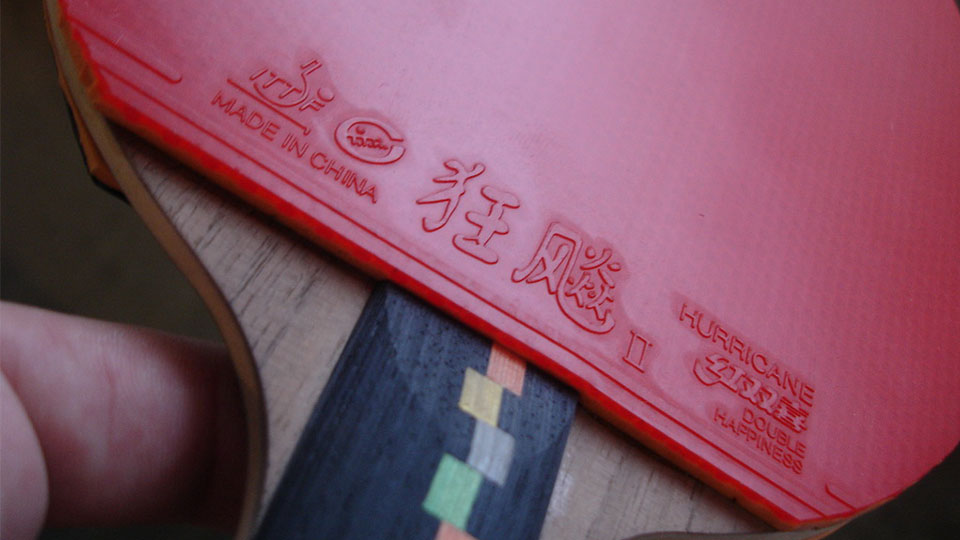 This is Episode 052 of the Ask a Table Tennis Coach podcast. Today’s question comes from Roanac and is about switching from a European to a Chinese Rubber.

“What are the changes that I need to bring to my game if I switch from a European rubber, such as Butterfly Tenergy 05, to a Chinese one such as DHS Hurricane 3 Neo?”

Lots of players that I talk to are not sure whether they should choose European style rubbers or Chinese ones. Back in the day when I was a cadet and a Junior I actually just had Hurricane rubbers on both sides of my bat. Mainly because they were cheap and I was getting through rubbers quite quickly.

Probably not the most ideal setup, though. If you look at most of the top Chinese players you’ll see that they go for a Chinese tacky rubber such as the Hurricane 3 on the forehand and their backhand they tend to not go for a Chinese rubber, something like Tenergy.

That’s the setup you’ll see most of the professional Chinese players having. A tacky Chinese rubber on the forehand and a softer Tenergy style rubber on the backhand.

What I think I want to do is share some of the replies from the people in that group and then add my comments as well.

The first one comes from Mikael Burgland and he said, “More looping, less smashing and less flat hitting.”

He’s right there. What he’s saying is that when you’re playing when these Chinese rubbers you’re going to have to change the type of shots that you’re using. This is the reason why the Chinese players often have these rubbers on their forehand side and not their backhand.

The Chinese rubbers are not so good at hitting flat balls. You really have to brush the ball in order to get the full effect of the rubber. Lots of players find that on the backhand they prefer to block, punch and hit those kinds of shots.

On the forehand, they might do more spin or more of a loop game. That’s why the top Chinese players have their bats set up in that way.

If you really like playing flat, as some do, then Chinese tacky rubber with a hard sponge isn’t the best choice. You might want to think to stick some short pips on your bat instead. If you like to loop with heavy spin then Chinese rubbers can help especially on your forehand.

He uses Hurricane 3 on his forehand and he boosts it to soften the sponge and give it more speed. Then he uses a Tibhar Evolution rubber on the backhand.

What you’ll find is that lots of players that choose to use these Chinese rubbers they do boost them. Otherwise, the sponge can be a little bit hard. Boosting is illegal technically and I don’t know what’s going on with the rules nowadays.

So whether you want to boost your rubber or not is up to you to decide on your own. You don’t have to boost them but many top players will be boosting Chinese rubbers.

Rory then goes on to say that Hurricane 3 is great for over the table touch play and pushing. At the same time, since the top sheet is hard, you need to use a fair amount of power to engage the speed of the sponge.

What you’re not getting here is the spring that you get from a Tenergy or ESN spring sponge. So you need to be quite strong and have fairly perfect technique to get the power and gears out of the rubber.

For looping, Rory says, “I find that I need to use more brushing on my stroke. If you don’t use a relatively full stroke you may find the Chinese rubbers are too slow for you.”

What he’s talking about is extending your arm and using a fuller stroke. You’ll see that lots of the Chinese tend to do forehand loops with quite a straight arm. I think that’s what Rory means here. It’s going to be easier to get speed and power if you’re using a Chinese tacky rubber if you’re doing more straight arm loops.

Obviously, this will be slightly tougher to control but you might need that to give yourself a little bit more. Because you haven’t got the sponge shooting the ball out.

Our third response came from Simon and he said, “I’ve played with both European and Chinese rubbers. I’m a level 2 coach so maybe I can say something of use. European rubbers generate a lot of speed from their bouncy sponge. Consequently, you can get away with some indifferent technique. On the other hand, Chinese rubbers require a full stroke to get more power so a full stroke is required to get the best out of it. Hurricane 3 Neo has a lot of gears and I can play all the shots with it. If anyone says it’s slow they just have poor technique. Serving is also a dream. Hurricane Neo 3 are also very cheap but don’t buy the national or provincial though as you can’t buy the real stuff anyway.”

What he’s saying is that if people are saying that the rubber is slow their technique is just bad and their not playing in the right way to get the stuff out of the rubber. I think that’s something I would generally agree with.

It’s one reason why I like to recommend tacky rubbers to newer players because they really reward you when you play well with good technique and spin. Whereas other rubbers like Tenergy are going to be fast all the time. When you play a perfect shot with Chinese rubbers you’ll really feel it out of the rubber. And you can get the feeling that the technique was good.

Back to Raonic’s original question. Yes, it might be worth trying a tacky Chinese rubber on your forehand like Hurricane 3. See if you like it. They’re really great for getting heavy spin on serves and loops.

But it really depends on your game. Are you a spin player? If not, you’re going to need to focus on learning to brush the ball, especially on your forehand loop. And playing with a slightly straighter arm and you’re not going to get away with hitting through the ball as much.

Even if you watch the high-level Chinese players smashing a high ball you’ll see that they tend to smash with a bit of topspin as well because that’s their style and how the rubbers work. So always playing with spin yields the best results.

I should say again that I haven’t used these Chinese tacky rubbers myself for years. But if I was to start taking my table tennis training and competition seriously again I think I might go back to it. It certainly seems to be working for the top European players.

I don’t think that any of them at all play with a European rubber on their forehand. That’s something to think about.

All of the top Chinese players will have their Chinese rubber on the forehand as the black rubber, not the red rubber. Then they’ll have the red one as the European one on the backhand.

I believe that there’s something to this. It’s Chinese tacky rubbers being better in black. I’m not 100% sure why. Maybe something to do with the dye. Have a look at the forums, they’ll probably have more information there. But it’s not a coincidence so if you’re going to go for a Chinese tacky rubber best to get it in black then you’re European rubber in red.