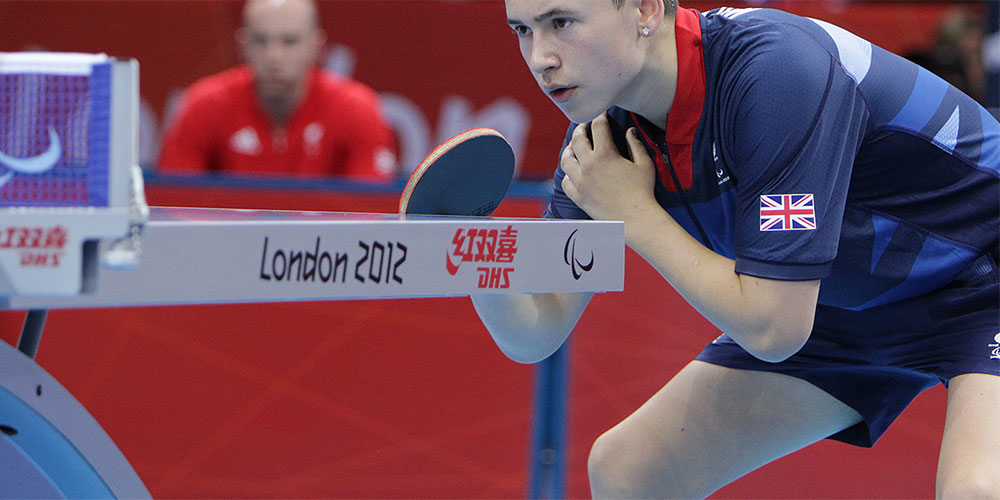 This is Episode 012 of the Ask a Table Tennis Coach podcast. Today’s question comes from Khaimchnd and it’s all about how to stay low during rallies.

“Hello, Ben. How do I stay down on my shots, even when I’m blocking? I constantly find myself standing up.”

Okay, well, the first thing to say is that this is another thing that loads of players struggle with. They start low but then by the end of the point, they find that they’re basically just standing up straight like they’re waiting for a bus. That standing up straight can have real effect on the quality of the strokes that you’re able to play because your head’s really up high, you’re not down with the ball and close to the table.

I think that a lot of this comes down to just your general stance – how good you are, how well you understand that. That’s why I always try and teach that right at the beginning. So I cover grip, how to hold the bat and then I focus on down to stance, getting that correct, and to try and help players to understand that.

If you want to be a serious table tennis player, you can’t just stand there playing like a recreational player. You need to get down, you need to bend your knees, you need to have a completely different stance. If you watch the professionals, they keep their shape throughout the points – they’re always in this kind of, they almost make their body into a bit of a ball. They use that and the shots all come from that center core.

A good illustration is if you picture a goalkeeper, and he’s standing there on the line about to face a penalty, how would he be standing? Would he be standing upright with his feet close together? No, of course not. That’s not going to help him to save the shot.

I think one way that can help with that is to have a clear distinction between when you’re in the point and when you’re in between points. If you go back to the goalkeeper analogy, they don’t stand like that all the time for 90 minutes in the game. It will be exhausting. For a lot of the game, they are just wandering around, watching what’s going on but then when they see, for example, a penalty or maybe just during the game, they see the other team coming towards them, attacking, you’ll see them immediately start moving their feet, getting lower, getting into position, getting ready because they might need to spring into action. That’s what we need to be doing during the game.

There’s one other thing that I’d like to point out which was taught to me by a Chinese coach when I was out in Denmark – that was the idea of thinking about your center of mass. So obviously, if you’re standing up with your feet together, your center of mass is going to be very high, up around your chest. You’re not going to be very balanced and you’re just very tall.

Now, what they were trying to get me to do was to keep it really low, at the bottom of my belly. The way to do that was to do a big exhale, like breathing out, let all of the air out of the body and as you’re breathing out, let your shoulders and your arms and your chest sink down into a bit of a ball. You feel now that you’re solid around the bottom of your belly. That really helped me to understand that idea of getting low and sinking down.

So you get your stance right, and you do that big breath out and you just let your shoulders and your arms and your chest and your back all sink down. You keep it there during the points so that when you’re on the table, that’s how you are – low, compact, in a little ball and ready to pounce and attack. And then, the minute that point ends, it’s like snap you can go back to standing up, walking around, and being relaxed, picking up the ball, and you’re just going in and out of those 2 stances. So, a clear distinction, I think that really helps.

I hope that answers your question. I hope you found that interesting, for everyone that’s listening.