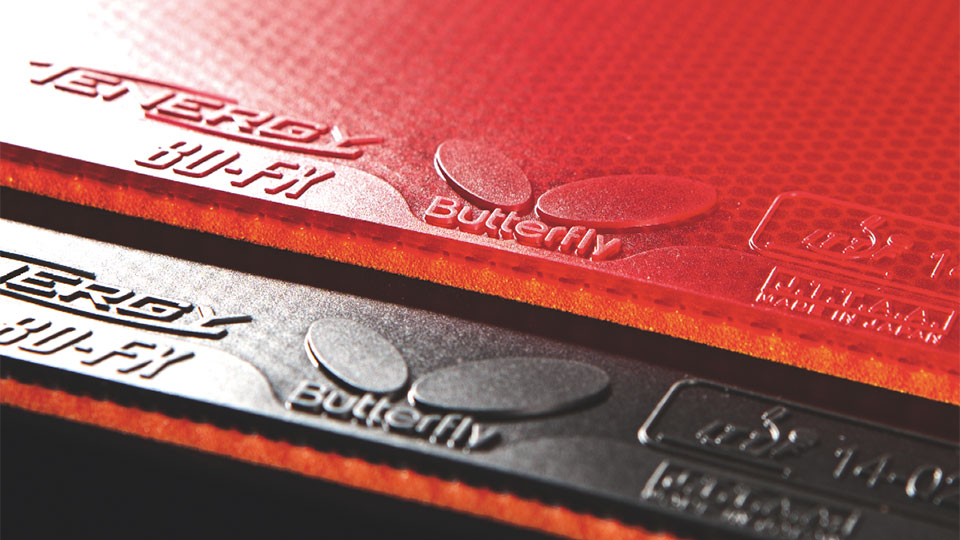 This is Episode 032 of the Ask a Table Tennis Coach podcast. Today’s question comes from John and is all about upgrading your table tennis rubbers.

“Hi Ben! I’m at the stage where I’m thinking of upgrading from the Palio Expert 2 racket to a custom blade and rubber set up. I’m pretty sure I know which blade I’m going to go for, the Stiga all around classic carbon. But I’m completely at sea when faced with the hundreds of different rubber available. I really don’t understand the different ratings listed for the rubbers, especially tackiness and grip. How are these even different? And things like throw angle. Help me. I’m a blocking occasional top spin attack on the backhand and I play a topspin attack on the forehand.”

You’re definitely right! Selecting rubbers in not easy as there are hundreds of different options and combinations you can put together. The brands certainly don’t make it any easier as they all use completely different systems when it comes to rating their rubbers and their claim from the different technologies are used when in fact most of them are made in the same factory.

It’s a bit of a minefield. I find tabletennisdatabase.com can be a really great source of comparing rubbers. But lets get straight into my thoughts on selecting rubbers.

If you’re going for attacking reverse rubbers, and it sounds like you are, then the main difference is really between the tacky Chinese rubbers and the un-tacky Japanese European rubbers. Most European players would be using un-tacky rubbers on both sides of their racket.

Tenergy, I find, is the gold standard of the un-tacky high performance rubbers of the modern era. Tenergy 05 on both sides is quite a pick. Some players go for Tenergy 64 on the backhand.

Now if you type ‘Tenergy’ on Google and do a search you should be able to find the image that shows all of the different arcs of the Tenergy rubbers, and that can be quite useful if you’re trying to learn what it means for arc.

What you’ll see is that Tenergy 05 gets up and down the quickest, as it’s got the highest arc. Tenergy 64 is the flattest, so it doesn’t go up and down very much. Tenergy 80 is kind of in the middle of the two and offers balanced arc.

On the backhand, if you’re looking for something with a lower arc like a Tenergy 65 – a fast slightly flatter rubber, there are loads of good alternatives to that. Most companies are able to create those rubbers, it’s the high arc Tenergy ones that they have struggled to replicate.

Get any decent Stiga or Donic or any top brand rubbers and you will find they all perform almost equally for the backhand.

So John it looks like you’ve gone for a wise choice in blade. You’re going for something that is all around and isn’t going to be too fast. I think you should be fine just buying fast rubbers. I don’t think that will have too much of an impact. It may take some time to get used to, but it shouldn’t be too bad.

If you’d gone for a super fast carbon blade I might suggest to go for slightly more control rubbers but I think it’ll actually be fine. If you’re still confused at all you can always phone the table tennis retailer that you’re using and I’m sure they will be happy to help you out when it comes to selecting a racket.

One thing that I’ve been working on is Eastfields. I’ve started my own table tennis brand with Sam from the Expert in a Year Challenge. It’s called Eastfield and our main plan with rackets and equipment is to simplify things. At the moment we’ve got the Eastfield all around bat, and that’s out on sale on our website Eastfieldco.com.

It’s also available on Amazon.com and we’ve created that to be a really good bat for players that want a controlled racket, that’s got good spin and not too fast. That’s perfect for beginners, improvers and intermediate players.

What we’re working on currently is the Eastfield offensive bat, which would be the one you could progress to after that. It’s going to have a much faster 7 ply would blade and rubbers.

What we’re hoping to do with that is to make things simple. Just split people into two levels – are you a beginner that needs a bit more control or once you’ve been playing for a few years maybe you’d want to upgrade to the offensive bat. Just simplify the options and not have so many rubbers and bats.

Definitely have a look at Eastfieldco.com just to check out what we’re doing with the brand as we are really excited about it and are looking forward to the future.