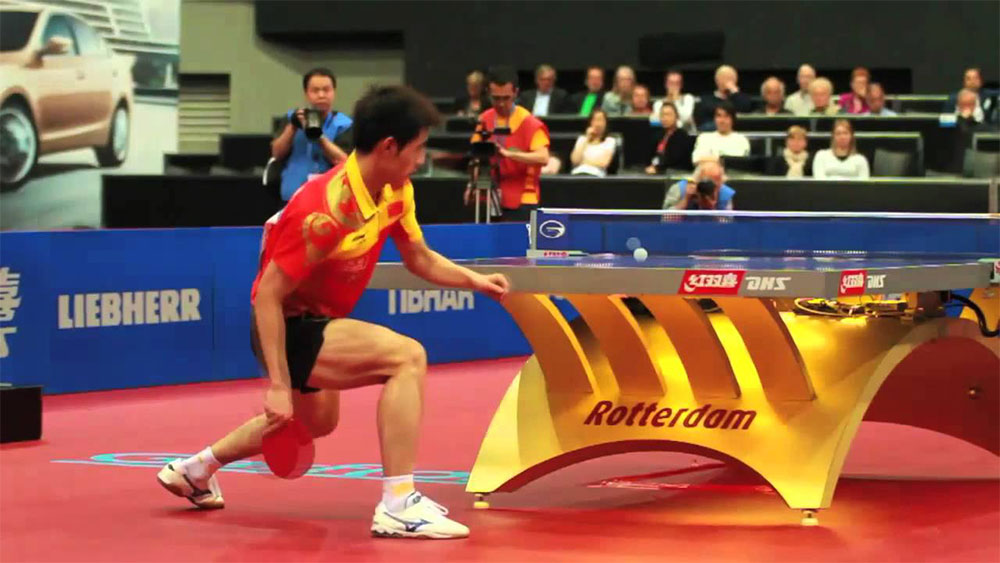 This is Episode 007 of the Ask a Table Tennis Coach podcast. Today’s question comes from Collin and is all about how to practice looping backspin balls.

“I want to improve my response to a chop specifically by learning how to execute a forehand loop, which is my first priority and a backhand loop which is my second priority. I’ve got access to a robot and I want to ask your advice on how to use this robot in my practice for looping against backspin balls.”

Well Collin it is great you want to learn to loop chop balls and this is a really important part of table tennis. It’s something that a lot of players don’t spend time on. This skill takes a lot of time to get good at, you see. It is easy to pick up the drive and the loop, it is fairly easy to pick up the push against backspin. But turning backspin into topspin is really difficult and it’s something that all decent players would be able to do, but lots of recreational players can’t do. So it’s fantastic that you want to do it and a robot is actually a really great way to do this.

I often recommend people to use robots for learning how to loop backspin. The reason is just that it’s hard to get that volume of backspin balls when were playing against other attackers. If you happen to have access to a chopper who’s able to chop well and you can loop and they chop, by all means make use of that because that’s brilliant. But that’s quite rare.

I know that there are only a few times during playing career that I happened to be in training with a group for choppers where I could just practice against chop and they were happy to chop for me. Most of the time it was just getting other players to do like a push that you open up and you just don’t get the volume. Whereas the robot is going to give you a change to practice hundreds of these situations in a short amount of time.

I think you’re also right about saying that the forehand is more of a priority and the backhand is secondary. A chop is quite a slow shot, so you can often get away with just using a forehand and moving around the table as long as you’ve got good footwork. And you actually see a lot of players at tournament would do this when playing choppers, mainly using their forehand. It’s good to have a backhand, but often in matches even players who have a good backhand would choose to use their forehand because they’ve got more confidence and it feels safer.

I’m not going to go into the details upon on the technique of the shot as I don’t really think that is what you’re asking. If you want to do that head over to YouTube watch some videos. I very much recommend you do that. But what I’m going to do here is give ten training suggestions about things that you can doe specially with a robot to really help you to learn how to loop back spin balls.

So number 1, what you can do is just setup the robot to send long chop backspin balls into your forehand and then you just stand there practicing your forehand loop. That’s a pretty good place to start trying to get the hang of the technique. Once you’ve done that then maybe you could start to experiment.

Number 2, looping some balls high and spinney so you get down looping them up giving them a bit more of an arch. Then looping some a little bit harder and lower, experimenting between the ways that you can loop. Just because its backspin doesn’t mean you have to really spin everything up. You have to time the technique right, as you see Chinese players really loop through the balls well. So you can do a bit of both and it’s pretty good to practice.

Then number 3 maybe you can think about changing your placements. You will probably naturally find that you’re kind of just looping all of these balls cross court. It is good to try aiming into the middle of the table, opposite your opponents body, and then also down the line. It’s going to be more difficult to do down the line just because the table seems shorter and the net seems a bit closer. But it definitely something that you can practice like alternating between whether you loop cross court into the middle  or down the line.

Once you’ve done that you can try keeping the ball fixed to the forehand side, but you push one and then you get down with your forehand loop. And then just alternate between the two and that’s going to make it actually a lot more difficult than you think. This is because you’re going to keep changing your body positions and your angle. But changing and finding your position again and adapting is what’s going to really increase the speed that you’re learning the shot.

According to research you learn lot quicker if you’re doing two things at the same time when you have to change between them then if you’re just doing the same thing over and over. So I think that’s a great way to do that.

In that same position, number 6, what you can try and do is one backhand push and pave it around the corner, play a forehand loop, back, play a backhand push, back around again, and forehand loop. You can alternate between those two so that you going to be doing pushing and looping which is mixing that up. You will also need to move around and I think you are going to find that quite difficult but very valuable as well.

Number 7, now you start setting up the robot toalternate between fore and a backhand, assuming that you’ve got a robot that is able to do that. And then you loop one ball forehand side and loop one with your backhand.

For the last couple of ideas, if you find yourself getting bored, I always find that it is a good idea to put up little targets on the table give yourself something to aim for. One thing I really like is, if you’re using a robot, often you get broken balls because people step on the ball. You can use the broken balls place it on the table in different positions and use that as targets. It is really satisfying when you hit a broken ball and it makes that kind of a crack noise and pings off the table. It’s quite a small target it’s not easy to hit so I really like doing that.

My final training suggestion for you is if you happen to have one of the really fancy robots, lik maybe like a Butterfly Amicus. It’s able to alternate between topspin and backspin because it’s got different heads. You could actually set it up to give you one topspin ball then one backspin ball and that would really mess with your brain because you have to go over the top and loop the topspin one and then get down and spin up the backspin ball. That’s something that’s really worth practicing. Do that with the robot if you’ve got a fancy robot that can do that, if not maybe try and get a coach to do that for you or get another player to feed multiple balls for you.

It’s really valuable to be able to work out the difference between looping backspin and looping topspin because you need to be able to just make that snap decision in a game and activate that type of loop. So there lots of thing you can do with a robot. It kind of gets a little boring, so as I said try to find ways to make it fun. Try and get the volume in because it’s no good just doing 5 minutes, getting bored, and turning it off.

You need to be spending the time going through everything that I’ve said. It’s going to take a while before you actually feel really confident. Find a way to make the practice fun and make sure that you’re using these in real life situations, like when you play against other people in your games. Try to see if you can get into these point situations: serve, return, looking to open up. And yeah, be brave! You might make mistakes but keep on practicing these key points and you will get better.

Okay, good luck Collin. Thanks for the question. I really enjoy answering those kind of questions as a coach because that’s what I’m passionate about and I hope that these answers came to help you improve your looping against backspin.