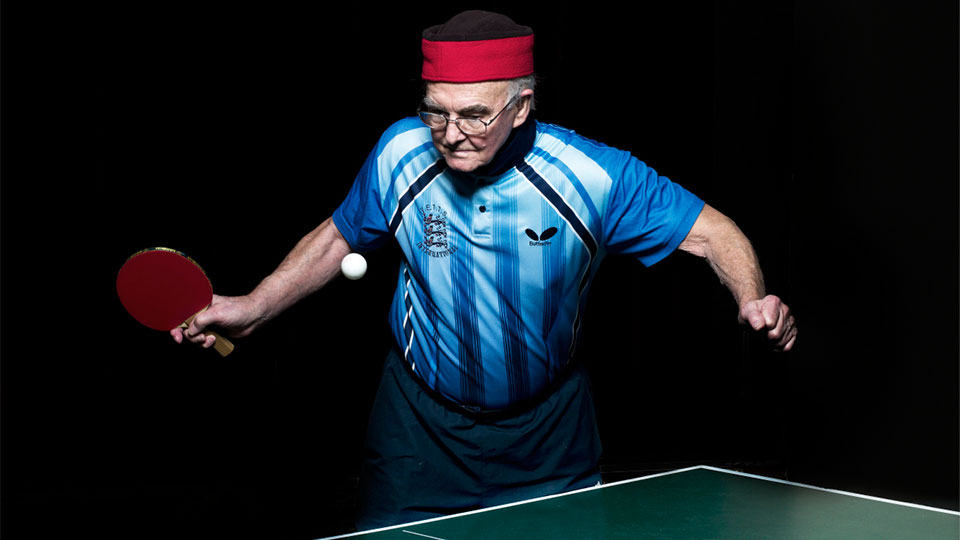 This is episode 038 of the Ask a Table Tennis Coach podcast. Today’s question comes from Dudnath and is about how to play great table tennis in your 50s.

“I’ve recently resumed playing table tennis after a hiatus of about 29 years, I’m now 50. Although I’ve not put on a lot of weight during my absence from the table tennis arena, my speed has slowed down considerably and as such I’ve been having a tough time keeping up with the younger faster players. A lot of the players who played during my early years, and are still playing, are now using long pips quite effectively on one side of their bat. Should I consider using long pips? Or even short pips on one side of my bat, along with an offensive rubber? I’m an attacking player who still has pretty decent shots. They’re not all that powerful and attacking backhand shots too.”

This is a really great question and thank you for getting in touch. Plenty of my Expert Table Tennis readers and listeners are in their 50’s and 60’s. I know some are even in their 80’s. And figuring out how to adapt your game and be realistic with your style of play is obviously going to be really important as you age.

This doesn’t mean that you can’t continue improving, you definitely can, but you’re going to be smart about it and plan a certain style that’s going to make it possible for you to keep going and improving.

The main question that you have seems to be should you switch from an attacking bat to a combination racket, with maybe long pips and short pips or even anti-spin for the sole reason that you’re in your 50’s now and you ‘need’ to have a combination bat.

My answer to that is a big fat no. There are plenty of good reasons to switch to a combination bat to start using pips if you want to but I’m not sure that you really have one. If you’re naturally an attacking player and like to attack on both wings I reckon you should just stick to that.

You can always give a combination bat a try and maybe borrow a friend’s and see if you like it and how it goes. But I wouldn’t pitch for it as some golden bullet that’s going to magically help you to get better results. I think if you’re an attacking player you’re much better off just sticking to that and working on your game in that way than switching to something else just because you’re in your 50’s.

What are some things that you can do to change your game and help you to keep up with the younger players? I’ve got four ideas here and I’m going to go through them now and share my thoughts.

Number one would be to work on improving your serves. Now age doesn’t matter at all when you’re serving. It doesn’t matter if you’re ten years old or you’re fifty years old, a serve is a serve. I would suggest getting super good at serving. That means heavy spin and good placement with variation and lots of deception.

If you can get really good serves then that’s going to give you a real big leg up. Lots of younger players don’t have the experience dealing with all these serves, so that can be a great way to keep up with faster players if you’re a great deceptive server.

2. Stay close to the table

Number two would be to remember to stay close to the table. Blocking and counter-hitting are great strategies for veteran table tennis players. You can really put some effort into working your blocking, control and feeling over the ball. If you’re able to improve the placement of your block and attacking shots it’s going to have a really big effect and make the shots that you’ve got more effective.

Just avoid dropping back from the table. You don’t want to get yourself stuck into loop to loop rallies where people are diving all over the place. That’s for the younger guys, I think. It’s best when you age to work on being close to the table and use the pace that’s given to you for placement and other clever stuff to win the points.

3. Develop your FH and BH

Number three would be to make sure you’re really solid on both wings. So you’ve got a good forehand and backhand attack. It sounds like you’ve got that already but what you’ll see is that younger players find it much easier to cover the whole table with their forehand, like using pivot forehands on the backhand side.

As you age this is going to become less and less realistic as a game plan. So you can’t afford to rely on your forehand. You need to be confident to stand your ground, stay at the middle of the table, and use both your backhand and forehand depending on what side they are playing the ball to.

Fourth and finally use heavy backspin digs. This is something that lots of younger players struggle with. What you can do is just get really heavy backspin and you’ll force younger players to either push the ball back, which will give you an opportunity to attack, or they’re going to get down really low to try and lift up this back spin.

Doing this they are going to spin the ball up high and if you’ve got used to lots of players doing that against you then you can stand your ground, stay up on the table, and get good at really killing those balls.

Get lots of heavy backspin, they’ll spin it up, you can stay close to the table and put it away with a kill. That’s a great strategy for older players.

Those are some ideas for you. Feel free to try them out and using a combination bat as well to see how that goes. There’s going to be lots of down sides to switching to a combination bat, as well as the advantages. Don’t see it as some magic thing that you just switch to using long pips and automatically you’re playing really well.