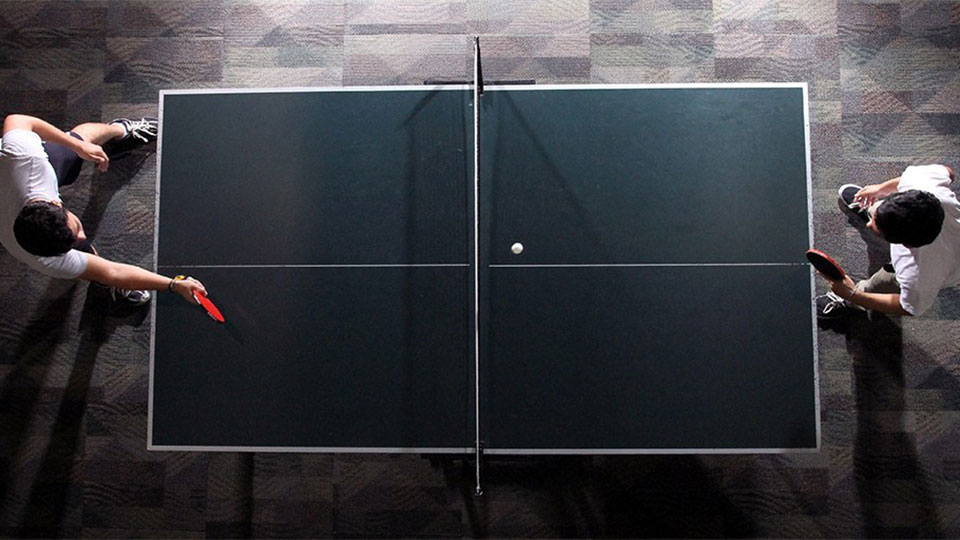 This is Episode 055 of the Ask a Table Tennis Coach podcast. Today’s question comes from Alberto and is about how to play as well in matches as in training.

“Hi Ben! I’ve been practicing drills for the coach robot practice partner for a couple of weeks now. During my practice I seem to be able to play proper forehand drives and loops. However, when I’m playing at my local club I’m not able to play with the same quality of strokes and I can barely find a proper time to play a forehand loop. Have you got any advice I can use so that my performance during the actual games will look the same as when I’m doing drills? It feels like I’m always running out of time to hit the ball and react with whatever I can do. Thanks!”

It sounds like you’re a fairly new player so congratulations for trying to learn the best sport in the world! That’s awesome.

The first thing I want to say is, by all means, you’re not alone here. This is something that everyone goes through. All levels from beginners to professionals. They struggle with playing as well in their matches as they do in training and they’re never able to find that form to have the perfect game.

Especially for new players. When you’re just learning the strokes there can be a much bigger difference in training and your matches than when you’re a little bit more experienced. So you can end up looking really good in training when you’re doing the techniques you’ve learned but it all falls apart in matches.

Here’s some of the theory.

There are lots of different stages of learning a skill. I really like something called ‘The 7 steps to mastery in Sport’ by Wayne Goldsmith. He talks about how lots of people learn to perform a skill, let’s say the skill is a forehand loop.

So you learn to perform a forehand loop when you’re there with a coach and you think ‘Ok, I can do this now’ and you do a little bit more practice where you get to the point you think ‘I’ve learned to perform the skill and I can do it very well’. Then you move onto the next thing.

But Wayne says that that’s only steps one and two of his seven steps to skill mastery in sports. Here are the seven:

So just because you can play a really good forehand loop or forehand drive against a robot or a coach doesn’t mean that you’ve fully learned the stroke. In fact, you might have only learned ten or twenty percent of the stroke. So you’ve got loads to learn before you’ve really got the hang of it.

Don’t move on so quickly. That’s my first tip. Make sure you’ve learned all of the basics and then over-learn them. Spend way too long on them until you can do them in your sleep and with no mistakes. That’s the first thing.

Until that point, you really don’t have a hope of being able to do that. So I would recommend reading ‘Bounce’ by Matthew Syed. He’s a former international table tennis player from England. He wrote it about five or six years ago now and it’s become fairly popular.

You may feel that you don’t have enough time because you might lack experience on the table in match situations. If you watch professional table tennis players it seems like they have loads of time to play their shot because they already know where the ball is going and have ample time to prepare for it. They know it so much earlier that they can play much easier.

That’s what’s giving them more time to react and the impression that they have more time. Even if technically the ball takes the same amount of time to actually get to them as it does to you.

What this means is the amount of time you have to prepare is so much quicker and why reading your opponent is such a valuable skill in order to be a good table tennis player.

If you’re doing lots of training with a robot or multi-ball that doesn’t really help too much with your anticipation. You need to be playing against other players, getting used to reading their body language and gauging where the ball is going to go based on that. It’s going to help you a lot more as you go into games and matches.

Finally, just remember that in a match your opponent is trying to make you play badly. That’s just something to bear in mind and it’s not often true in the training hall.

So they’re completely different situations. You’re never going to be as good in a match as you are in training because you have got someone on the other side of the table trying to make you look bad and miss the ball. It’s something you’re going to have to accept.

In training, you’re normally working together with your partner and you want each other to play well. In matches, you’re trying to mess the other person up and make them play badly. You can’t really expect to play as well in your matches as you do in training.

Don’t panic. Don’t worry about it. It’s not going to be any harder for you than it is for everyone else. You have to just trust that everyone’s gone through this as a new player. Just keep training and wait for it all to click and come together.