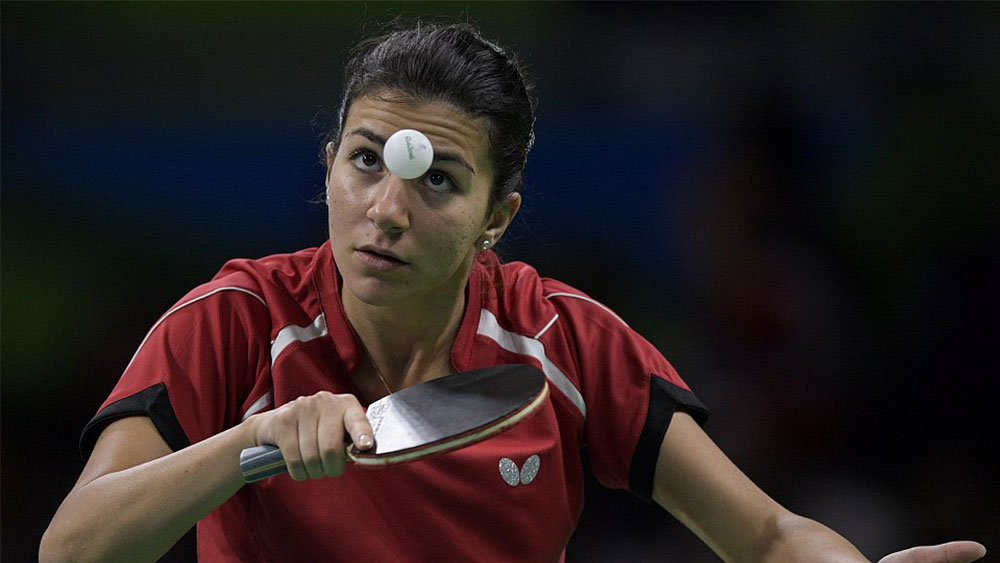 This is Episode 002 of the Ask a Table Tennis Coach podcast. Today’s question comes from Peter and is all about how to keep your serves short.

“Can I ask what are the key points in producing short serves? I understand I need to create more rubbing power than hitting power and use my wrist to create spin, but whenever I try to make a short service it always goes long.”

Now, Peter this is a really brilliant question and something that a lot of players struggle with. Lots of people are not able to serve short. They are serves that are always drifting long or especially in matches they find that when they’re under pressure they just can’t keep that ball short.

For those of you that aren’t aware of an objective difference between a short serve and a long serve it’s not just down to, “Oh, I kind of think that was a short serve.” There is an easy way to tell and that is if you think about the other side of the table from where you’re serving.

If you are able to get your ball to bounce twice, if your opponent wasn’t to return it, it would bounce twice on their side – then that is technically a short serve. If it’s going to bounce once and then drop off – that’s a long serve. Even if it’s only just dropping off the end that’s still a long serve. That’s a serve that they’re able to wait for the drop-off and loop an attack.

If you want to be getting in first and stopping the receiver from attacking then you need that ball to bounce twice to force him to play short over the table. So that’s why people want to serve short and that’s what Peter’s trying to do here, he’s trying to make sure that ball bounces twice on his opponent side of the table. So he’s correct about brushing not hitting the ball really hard as it’s going to be difficult to keep it short and even if you’re just doing kind of like a tap shot where you’re just trying to hit it softly. If you’re not using spin you’re going to have to basically do a really bad serve to keep it short. You’re going to be hitting flat then that is only really good for the long serves not actually good of short serve as short serves are a great chance to use spin.

Now if you make that ball bounce on the end line close to you then it should go fairly close to the end line on the other side of the table. I’ve had this explained to me almost like the net is a mirror and you have got two sides of the table. So anything that deep or long on your side when your serving is probably going to bounce deep and long on the other side, therefore it’s gonna be very difficult to get that second bounce to be on the table.

I think most players, if you watch descent players that are serving short, see the balls bouncing somewhere between the end line and the net. Maybe about halfway or closer to the net. That’s about as close as you can get without kind of just putting your serve into the net. So what you need it be doing when you’re trying to serve short is actually sending that ball a little bit further forward, a little bit closer to the net on your bounce and that’s going to stop you from being able to hit it too hard but you will have to brush it quite finely. It’s almost like you’re kind of floating the ball forwards off your serve instead of hitting it down into the table.

If you hit it down at the table it’s going to have way too much power and it will shoot off and go long, but when you want to do the short serves you almost want to use the spin kind of float the ball forwards till it kind of glides and drifts and bounces very softly into the table and then it’s going to bounce over and are going to get one, two maybe three bounces on the other side of the table. Those are the key things.

So if you’re serving and they’re all going long, have a look maybe mark on the table. What you can do is you can just wipe your finger, draw a little dot roughly where the ball bounces and then try again and see how close to the end line you are serving. If that balls bouncing onto the end line you’re probably gonna be pinging things very long. This little tip works for all different types of serves; backhand serve, forehand serve, tomahawk serves or whatever serve you’re doing. If you’re hitting the ball on your end line it’s probably going to go quite long that’s going to allow you to give some very good fast hard heavy serves but if you’re trying to get the ball nice and short, gentle, and keep it low then you’re probably going to be wanting to get that bounce a little bit closer to the net on your side.

The last thing you need to think about just the height as well, see if you’re making your contact too high it’s going to be very difficult to keep that ball short. So try making your contact nice and low, feel that ball kind of gliding forward floating of your back gently bouncing on your side, fairly close to the net and then just dropping over instead of making contact quite high and bashing the ball down into the table and then watching it kind of ping of the other end then not bounce twice.

So, Peter I hope that answered your question, go and try that out and mark the table on your side where the ball’s bouncing so you can get some feedback of “Oh that’s probably bit too deep I need to move it further forward”.