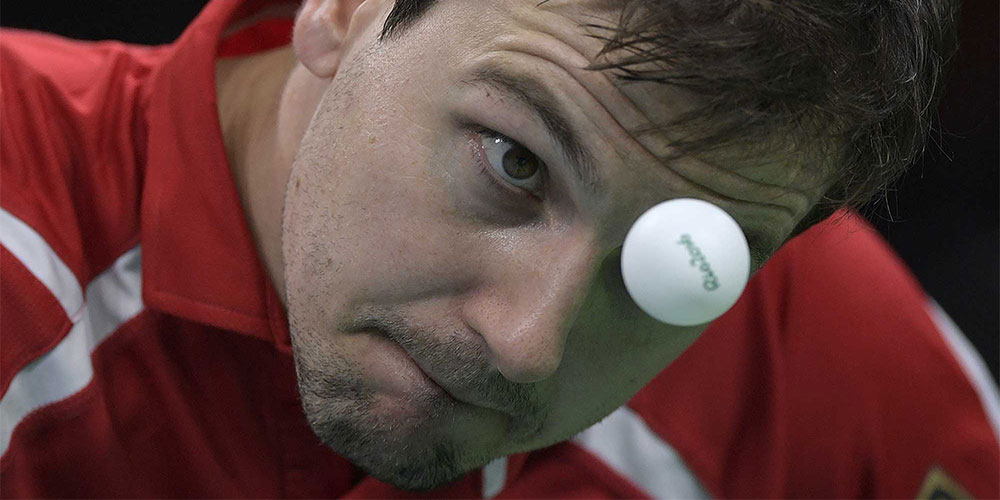 This is Episode 010 of the Ask a Table Tennis Coach podcast. Today’s question comes from Brendon and is all about how to keep your eyes on the ball.

Okay, so Brendon is asking about whether you should track the ball onto your bat and watch it the way in. Really good question. So the first thing I want to point out is the idea of thinking too much about execution and forgetting to look at the ball. It’s always a bad idea to focus too much on the execution.

There’s a term called paralysis by analysis where you really start breaking down the technique when you try to play a game if you’re thinking about “Right, how do I play this back hand? How do I do my serve correctly?” that can lead to just everything falling apart.

You’re much better to learn it, to get it into your muscle memory and then just to do those things instinctively while focusing on other stuff. It’s always a bad idea to start thinking too much. Sometimes we find when we get nervous we then start try to break things down and it just gets worse and worse. So I don’t think necessarily that forgetting to look out the ball is your problem, Brendon. If it’s to do with thinking about execution I think you want to try and clear your mind of thinking about execution as much as possible especially when you’re playing matches.

But where should you watch the ball or not, that’s really interesting. I think there’s a little bit of a difference depending on your level. If you’re a beginner then you’re going to have to be focusing a bit more of your attention on the ball. This is because you’re just not going to know exactly where it’s going to go. You haven’t built up all of that information, all of those queues about standing this way, why they did that, their wrist said the balls going to go here. So it’s going to take you a little bit longer to work out from the shot on the ball where that ball is actually going to be.

Sports science research agrees with me here, that the elite players are able to tell where the ball is going to go. Sometimes even before it’s been hit and that’s been improving and also to different sports.

So if you’re a beginner, maybe you’re going to focus more on tracking the ball whereas the elite players instinctively know. Sam really showed this to me during the Expert in a Year Challenge. Sometimes I’d be playing with Sam and for whatever reason I didn’t have my glasses so I couldn’t see very well. My prescription is actually quite strong but I realized that it didn’t seem to have any effect on our games, whether I was wearing my glasses or not.

I was surprised by that, I was thinking if I’m not wearing my glasses then maybe this is going to give Sam a big opportunity to beat me but I instinctively track where the ball was going to go based on looking at the big stuff like his body movements. I was focused on where his body was positioned even if I wasn’t actually able to see the ball that well. So yes, stuff like that shows you that it’s not all about tracking the ball.

Now I remember reading something that Shawn O’neil wrote a while back. Talking about tracking the ball with your eyes and not your neck. I think what he means is you don’t need to turn your whole body and your head to literally be watching the ball. You’ll actually be able to use your peripheral vision a bit.  Even if you’re looking straight forward you can picture everything that’s happening over to your left or to your right. You can keep your head forward looking at the table and your opponent and you’re still going to naturally track that ball even if it’s kind of slightly out of the vision that you’re looking at. So I think you’re naturally going to do that.

The idea of tracking balls is not something that I’ve never really thought about myself as a player. It’s not something that I’ve made a big point to tell the people that I’m coaching. I guess the only caveat would be, if it’s sound coaching and if you’re a complete beginner and they keep missing the ball then maybe they do need to really focus on the ball.

Most people aren’t making mistakes just by swinging and missing the ball. They know where the ball is. It’s the other stuff that’s causing the errors and I think one of the key things is actually getting yourself in the right position relative to the ball. It’s not about just standing there and putting all your effort into tracking the ball, working out where it’s going. It’s actually putting the effort into moving into position where you’re going to be able to hit that ball and that’s going to come with the experience.

So Brendon I wouldn’t worry too much about trying to track the ball. That would probably my advice. Your body isn’t going to let you just completely ignore the location of the ball. It’s going to naturally track the direction and the speed, work that out for you, that’s just what it does.

So I would say try and be more like a professional. Think about your opponent, think about tactics where you want to place the ball and let everything else like the execution, the technique, your strokes take care of themselves. You should’ve got that groove in training so that will just happen.