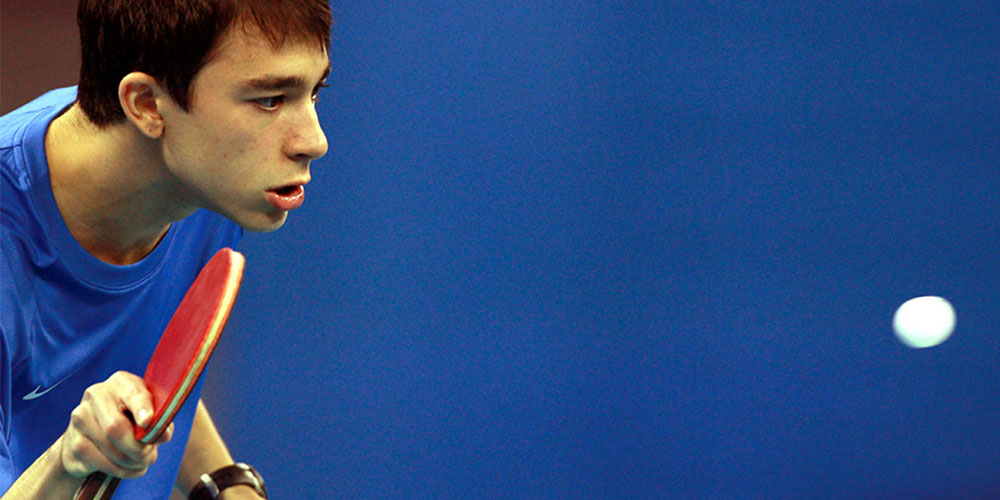 This is Episode 018 of the Ask a Table Tennis Coach podcast. Today’s question comes from Neil and it’s all about how to continue improving over the long-term.

“I was just wondering how Sam is getting on now and how much you feel he’s improved since the challenge has ended? How far do you think Sam could have progressed if you’d carried on with the intensive training over a longer period, let’s say, 5 years?”

Okay, for those who are listening and are thinking, “What on Earth is Neil talking about?” – Sam and the challenge. He’s talking about the expert in a year challenge which took place back in 2014. That was basically, I convinced a friend of mine called Sam to let me coach him table tennis for an hour everyday for a year, to see how good he could get by the end of the year.

We set a goal of him becoming a top 250 player in England by the end of the year. He went to tournaments and training camps and all sorts of things to try and achieve that. He had me there coaching him as well everyday.

So, Neil, this is a really good question. That’s because I said at the time that I was going to keep people updated, and I haven’t. I apologize for that. Sadly, Sam isn’t playing table tennis anymore. He did continue playing for a bit after the end of the challenge. He even joined one of the leagues in London and was playing matches against other clubs in the London league.

But then, he decided to actually start another expert in a year challenge. About 18 months ago, he picked up the sport of Brazilian Jiu-Jitsu and began to focus all of his energy on that and he dropped the table tennis.

Now, I should say that Sam was never really into table tennis in the first place. I strongly encouraged him to do it and he was doing it for my challenge. And Brazilian Jiu-Jitsu, I think, is actually a much better fit for him, it’s something that he enjoys a lot more. It’s good to see him moving on and doing that. He’s still involved in sport and trying to learn and improve as well.

Now, the good news I guess is that we have played table tennis a few times over the last 18 months since the challenge ended. Sam’s actually been able to maintain a fairly high level of ability. I know lots of people thought that because he learnt it so quickly and intensively that he’d forget it quickly as well. But he hasn’t at all and looking at some of his techniques, like his backhand in particular, I always thought it looks better now than it did during the challenge.

He’s definitely a bit rusty but the foundation and all of the technique that he learned are still there. I’m sure that he can pick it up anytime later in life with these and get straight back into it. He loves Brazilian Jiu-Jitsu and not playing so much table tennis now, but I reckon he could easily get back into it.

We spoke after the challenge finished, quite a lot me and Sam, about how good he could’ve got if we’d continued it for a longer period. I also spoke to a number of other friends, table tennis players and coaches about that idea as well. I think we decided that it would probably take at least 4 years of that kind of expert in a year level intensive training to get him to a top 250 level. So he did one year and probably would have taken 4. It probably would have taken 4 times as much training to reach that level. Sam did about 500 hours of table tennis during 2014. We reckon it’s probably going to take about 2000 hours to get to that level of expertise.

If we were still going now, I guess we would have just finished year 3. So 2016 would have been year 3 and we’d be just about to start 2017, which would be the final year of our 4-year thing. It gives you the idea of the real level of dedication and time that you have to dedicate to something like this in order to get really good at it.

That’s more in line with what you see from junior players. You’ll see lots of players start playing at the age of 10 or 11, and then maybe by the time they are 16, 17, 18. If they’ve been playing a lot, they’ll get to that top 250 level. Maybe they’ve been playing for 6 or 7 years – the first few years not so seriously and then taking it a bit more seriously in 13, 14, 15. I reckon that number is fairly similar, fairly in line. But it does show you that if you want to get good at table tennis, you need to be giving it at least 3 or 4 years. Even in a year, Sam got very good in a year but not good enough to compete on the tournament circuit.

Some people said that maybe if Sam is a bit more sporty, he could have done it a bit quicker, maybe in 2 or 3 years but no one’s going to do it in a year. Also, there’s a very different thing between beating a top 250 player once, and actually being able to justify having a ranking of top 250 and that being representative of your true level. You’ve got to be very good to keep a top 250 ranking and beat all of the players below you and stuff like that.

I reckon if you’re listening and you’re an adult beginner, you follow the challenge, and you’re keen to get involved and really go for it. It’s encouraging, I think, because you can definitely do it but you need to be prepared to seriously go for that training and to spend that many hours – 2000 hours – maybe 4 or 5 years to reach that decent level.

You hear people talking about 10,000 hours and the 10-year rule and all of that stuff of becoming a really good player. So I guess it makes sense that maybe 3 or 4 years and 2000 to 3000 hours would be good enough to get you to a decent competitive level of ability.