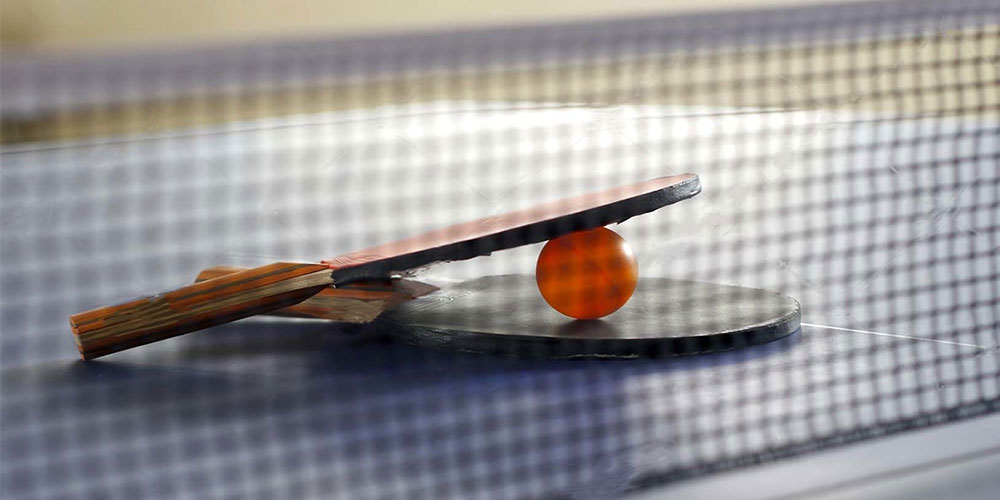 This is Episode 014 of the Ask a Table Tennis Coach podcast. Today’s question comes from Branco and it’s all about how to choose the best equipment.

“Which company has the best products? Is it true that Butterfly and Stiga are the best companies with the highest quality blades and rubbers? It appears that nearly everyone in the top 20 in the world is playing with either Butterfly Tenergy or DHS Hurricane. Why is that?”

Okay, I’ll start off by just saying that Butterfly are a really good table tennis company. I’d like to call them the Nike of table tennis. And Tenergy is a really really good rubber. So Butterfly have their own rubber factories and that’s where they create Tenergy in Japan. Those factories are only used for them, no other brands or companies use those factories at all. It’s all very much secret, behind closed doors, what they do to create Tenergy. Other brands have been trying to copy them ever since Tenergy was first released in 2008.

Now, when it comes to most other brands – Stiga, Donic, lots of other brands, Joola. What they tend to do is, instead of having their own factory, they all use some of the same factories. There’s one called ESN, which is in Germany and they produce loads of the tensor rubbers that are used by all sorts of different brands. If you do a search on Google for ESN tensor rubbers, you’re going to see how many different brands are basically all getting their rubbers made in the same place so therefore going to be fairly similar. There’s also a factory in Japan, that does a lot of stuff for. There’s load of places in China, rubber factories in China that make rubbers for different brands.

So Butterfly, I guess, are the ones that are really able to have the money to put in to the research, that the others don’t. Even though you might see loads of different fancy names and technologies put on the packaging of rubbers, don’t necessarily believe it. I think a lot of that is just nonsense that has been made up, to be fair.

Now, okay, when we come to Chinese players using these Hurricane a lot. I think that’s generally down to the style that they use. They tend to go for a hard tacky rubber on their forehand and a softer one on the backhand. So you’re going to see may of the top Chinese have got Hurricane on the forehand, and Tenergy on the backhand, and that’s what they play with. Whereas, European players often would just have Tenergy on both sides so that the racket is going to be the same on the forehand and on the backhand.

When it comes to blades, Butterfly blades are very good, Stiga blades have got a good reputation. Those companies have long histories of producing their own blades. But ultimately like I said earlier, I think all the other brands are starting to catch up, especially with the rubbers. There’s a lot of decent rubbers coming out now from different places that are in many ways fairly fairly close to Tenergy whereas, maybe 5 years ago that wasn’t the case.

To be fair, Tenergy now is actually quite old technology. I think it was released in 2008, maybe 2007 even, so it’s at least 8 years old and I guess everyone seems to be waiting to see what’s going to come up next and replace Tenergy. Surely, it isn’t going to be too long before there’s a new rubber that everyone’s using, potentially made by Butterfly, maybe by someone else I’m not sure who else might come through. We’re looking for that big breakthrough. I’m sure it will be more expensive than Tenergy is now, but it will be interesting to see what happens, what the new revolutionary rubber is.

Now the last thing that I want to say before wrapping up is, quite a long time ago, pretty back 18 months ago, I had Paul Drinkhall, England number 1, on my expert table tennis podcast. One of the things we spoke about was him switching from being a Butterfly sponsored player, using Butterfly equipment to being a Tibhar sponsored player. He did that 18 months ago, maybe 2 years ago, completely changed his equipment, he’d been using Tenergy for, ever since it came out and he switched to using the Evolution MX-P rubber from Tibhar, and a Tibhar blade.

I have to say since he’s made that switch, and since we had that podcast, Paul has had some the best results of his career. He’s up to a career high ranking up in the 30s or the 40s in the world, where he was down to the 100s before that. He even said in the podcast that he thought that most players probably wouldn’t notice that much of a difference if they were to swap their Butterfly Tenergy for the Tenergy alternative from another brand. It certainly seems like it’s not as big a deal as people think. Paul is proof that Tenergy isn’t… If he can get the results that he’s getting not using Tenergy then, definitely everyone listening to this show is not like you have to have Tenergy, you’re not going to get the results, that’s just nonsense.