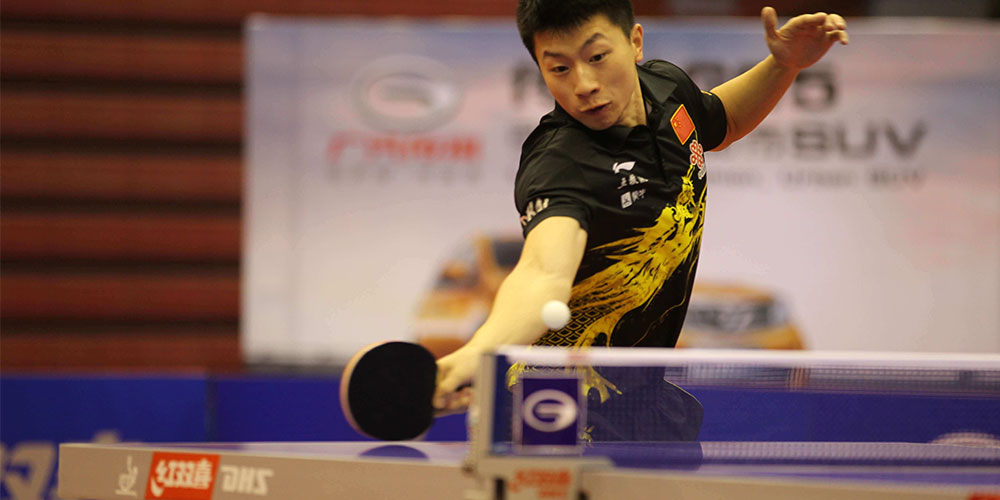 This is episode 24 of the Ask a Table Tennis Coach podcast. Today’s question comes from Bruce and is all about adding spin to your forehand loop.

“My coach says I need to spin my forehand loop more. Do you have any suggestions to get spin on the forehand loop?”

Loads of coaches tell their players they need to spin more. If you watch professional table tennis players practically every shot they play will be a heavy spin shot, even the hard and powerful ones. When it comes to the rest of us that’s not always the case. Sometimes we are just hitting the ball way too flat, without spin.

Coaches are able to pick up on this when they are watching us, so often you will hear them saying “More spin! You need to get down! You need to brush more! You need to get more spin on your shots!”.  They see this as being one of the key problems causing people to have all these unforced errors and to miss shots they should be getting on the table.

The question that we really have is HOW? How can you add more spin? Its no good just constantly saying “You need to add more spin!” because players know they need to do it, but how can we do it?

Technically if we are thinking about how spin is generated in table tennis you might hear things like “Brush the ball, don’t hit the ball”. So the idea is that you need to be brushing with fine contact on the ball instead of hitting through the ball and following through. That’s one thing you’ll hear.

Some coaches will go for the “Relax the arm and use your arm like a whip” so that you’re able to generate more spin that way, instead of being all tense and hitting stiff and flat.

There’s loads of ways of going about it and that whole thing is not just about your forehand loop, its on all the strokes and all the serves. It’s just about learning how to contact the ball correctly to maximize the spin. Once you’ve got it then you’re going to be able to apply that to all different areas of your game.

One thing to remember is that if in your mind you’re just thinking about hitting the ball as hard as possible all of the time, with all of your shots, you’re probably not going to get much spin. The focus is just “I want to cream this ball really hard”, and chances are you’re just going to end up hitting the ball flat.

Whereas if you focus on really heavy spin on your big shots, even on your forehand and smashes, you can quite easily add power AND spin to them. So if you’re going for spin, it’s quite easy to add power. But if you’re going for power, you often forget to add the spin. That’s why it’s better to have spin as the main thing you are thinking about.

Now one way that you can learn to add more spin to your shots is to use different drills and different situations that coaches have up their sleeve that they like to bring out to teach the generation of spin. I have got a couple here and I would like to share them with you.

The first one is to use heavy back spin balls to teach how to generate heavy topspin. What you could do is if you’ve got a robot at home, or at your club, you could set it up just to feed heavy back spin balls into your forehand and you can practice trying to open those up with a forehand loop. Robots tend to, well the older fashioned ones, have only one level of spin – super spin. So you just get these super heavy back spin heavy balls going into your forehand and its going to be really difficult to spin those up.

But once you’ve got the hang of that, once you’re able to play a proper forehand loop and generate the topspin to turn that heavy back spin into top spin and get the ball back over the net, then you should be able to apply that to all the different shots in your game. Because all its doing is forcing you to get more spin on your loops than you would normally if you were just doing a topspin rally.

So that’s one way to go about it. Often, after you’ve been practicing that for a long time, you might go back on the table and find that you’re looping everything off the end because you’ve just been messing up the angle. But once you learn to change your angle then that can be a good way to practice adding more spin.

There’s something else that was shown to by Steve Brunskill, who’s the coach of ‘Swerve Table Tennis Club’ up in the North of England, and what he was doing was he was getting a coach or another player to feed multi-ball. So feeding the ball into the forehand, letting it bounce onto the forehand side, then leaving it again to let the ball bounce on the floor. He would have the player fairly low quite a ways back from the table and play a forehand loop after the ball bounced on the floor.

So what happens is because the ball is now so low in relation to the table and the height of the net you really need to get down and use heavy spin to brush the ball. You need to create that arc where you’re going to get the ball up above the height of the net and then to come down again quickly so that it doesn’t just shoot off the end.

Really that’s just one way of teaching players to play with heavy spin because if they just start hitting the ball flat and hard, when you’re taking it close to the floor and trying to get it on the table, you’re just going to be sending the ball in a straight line way off the end of the table on the other side. Unless you are able to generate that heavy brushing spin contact that’s going to get the ball up and down quickly with the arc to get it to land on the table.

So those are a couple of things you can try. I’m sure that other coaches have got different tricks and drills that they like to use. There’s all sorts of things that could work but those are two things I’ve seen work myself.

Ultimately its all about forcing yourself to just practice brushing the ball instead of hitting it. So keep that in your mind and learn to use a fine contact, but still with lots of speed and lots of acceleration. You don’t need to go any easier, you can still swing your arm into the ball and snap and do all of that, your just putting it into spin and friction on the ball.

Good luck Bruce! I hope you are able to get some more spin on your forehand!