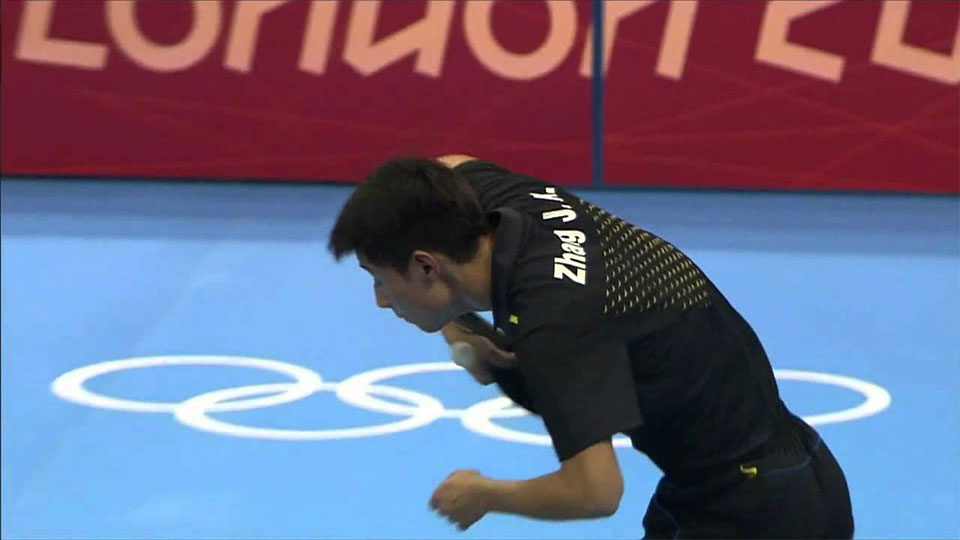 This is Episode 054 of the Ask a Table Tennis Coach podcast. Today’s question comes from Steve and is about getting backspin on a reverse pendulum serve.

“For years the reverse pendulum serve with backspin has alluded me. I can achieve a very strong reverse pendulum side and top spin serve but as far as I can tell as long as my paddle is swinging sideways, even if the paddle face is open, there’s no way to apply actual back spin to the ball. Rather, it’ll be pure side and after two bounces over the net side slightly top spin. My training partners now know that if they ever see the serve they’re free to loop away on it. I’ve watched Zhang Jike’s reverse pendulum serve in slow motion and as far I can tell he never seems to apply side and back spin either. Rather it’s mainly pure side spin. Am I missing something? How does the lack of variation not get him into trouble? If you or anyone you know has success with this serve I’d appreciate the insights.”

A really brilliant question and one I’m looking forward to answering.

Firstly I have to say that I am pretty awful at doing the reverse pendulum serve. I was too old to learn it as a kid really, it didn’t come in till I was a little older. Then I started to try learning it as an adult and I just never put the time into it to be fair. I’m sure I could have learned it, but I didn’t work hard enough.

I guess I was fairly happy with my other serves so I just gave up on it. And I had the same problem as yours. I could do the reverse pendulum serve fine with side and top spin and everyone knew that so they would attack it straight away. I never got the hang of getting around the ball so that I could get side and back spin.

That’s just a much more awkward serve. When you’re creating back spin you really need to be bending the wrist around and it’s difficult to get into that position. Whereas side and top spin is fairly easy to swing your arm and create that kind of spin.

Lets get into the answer.

But the side spin is always going to be there. That’s just always the way it’s going to be.

Now the other key is to have the racket movement on contact with the ball going from back to forwards towards the net.

I think the problem that I had and lots of other players had is that their racket movement during the swing of the serve is going parallel to the net and endline of the table. That’s the problem. You actually need to get the movement of the racket on contact with the ball to be going forwards over the table towards the net.

This means you need to bend your arm and wrist in all sorts of weird ways in order to make that possible. It’s easy with the standard pendulum serve, that’s just where your bat goes. To do it the complete opposite way 180 degrees around means a lot of weird wrist bending.

Naturally when we’re doing the reverse pendulum serve we make contact with the back of the ball and then our brushing action is going away from our body with the flick of a wrist and we end up getting those side-top spin serves.

When you’re doing this reverse serve backspin you’ve got to get yourself underneath the ball. You’ve got to twist your wrist almost as far back as it can go. So you make a weird box with the upper and lower part of your arm and wrist.

As you make contact with the ball you’ve got to really flick your wrist forwards and that’s the way you get the backspin on the ball. It’s a big bend of the wrist that makes that angle possible and is just generally difficult to do.

If you look at Zhang Jike’s serves they do tend to be quite high up. And I think lots of them are mainly side spin serves so I think you’re right there. But it’s the one where he gets the extra wrist from drawing it back where he’s actually able to get back spin.

He is definitely doing side back spin serves as well as side and side-top spin ones. There’s no way that he’s getting away with not having a side backspin reverse pendulum serve. So you’re going to take that for granted. But it’s very subtle.

I would say that the top players are not looking to actually create a pure backspin serve because that would be too easy to read. Instead, what they want to do is have all of their serves looking fairly similar. So then whether they’re doing side-top, sidespin or side-back it’s actually just the really subtle differences in their wrist that changes the spin. And that can make it really hard to see in video, even in slow-mo.

But I know that if we were on the other end of the table from Zhang Jike and he was changing the spin on his serves then we’d really feel the difference in spin as we try and return them. It’s just difficult to see on the TV.

Just picture what the racket needs to do in order to create back spin on any serve. It needs to be underneath the ball and moving generally towards the net on contact with the ball going over the table. Then just start having a go and try having some shadow practice. You don’t even need the ball. Just getting the motion right for that reverse pendulum serve.

It’s not going to be easy and it will feel a bit awkward at first but you get the wrist going, get some practice, then you can add the ball. Hopefully you’ll be able to get some back spin on your serves.