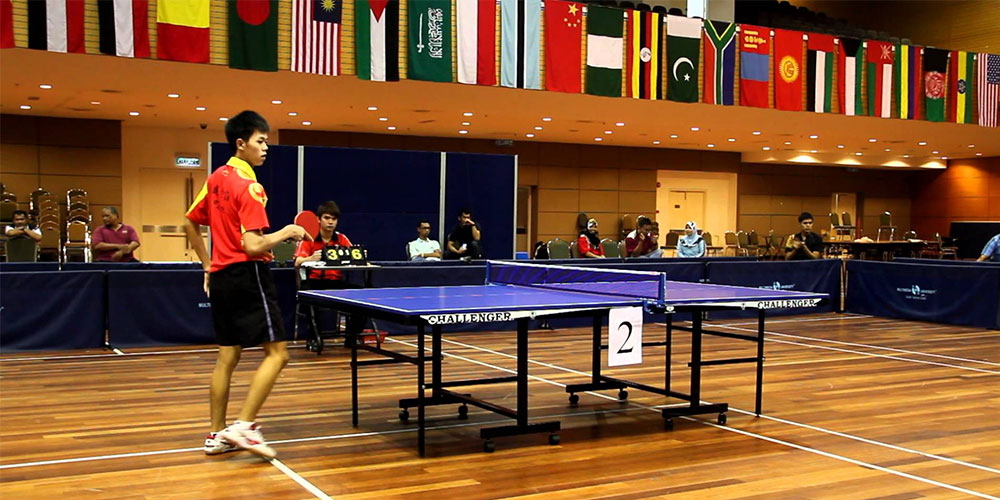 This is Episode 023 of the Ask a Table Tennis Coach podcast. Today’s question comes from Busy Nizzy and is all about the nutrition between matches.

“What should I eat and drink between the games of a match? And between the matches of the tournament?”

This is a really important question and the reason being is that tournaments can be really long things. Table tennis is a really different sport to others where you could have ten maybe fifteen matches in one day of the tournament.

It’s difficult and not like when you only have one football match and you can prepare everything for that one game. Or if you are doing a race and you do the ‘Eating 2 hours before the run’. Table tennis does make it quite difficult because you kind of always have to be ready.

I really like this question and I’m not a nutritionist or a dietician but I have been playing tournaments myself and coaching players for many years. I have managed to work out what works for me and pick up tips along the way. So I hope I will be able to help you with this question.

So if we split it up in halves and start off by talking about what to do in between games of a match. As far as I’m concerned very few people actually end up eating things in between the games. Let’s say you play the first set and win 11 – 6, very few people would go to their corner for that short break and start eating anything. Occasionally you might see player have half a banana or something if they are feeling really short on energy and want something easy to digest. But generally you don’t see people eating much.

You also don’t really need to drink that much in between games of a match either. I mentioned running earlier and having a race, I have done a bit of running recently. I found out that when it comes out to around a 10k distance race, something that might take an elite athlete 30 minutes to complete, very few of them actually get a drink along the way. They would just drink afterwards. So you don’t really need to drink in something that is only going to take 30 minutes. And most table tennis matches are probably around that range of 30 minutes long, sometimes shorter, so you can get away with not drinking that much throughout the match.

If you do drink during the match just try and take a few sips of anything, either a water or sports drink or both, and try not to get too full. Probably if you are playing in a tournament that’s going to last all day, or maybe a 2 day event, I would recommend not solidly drinking sports drink as I think that can send you a bit mad. Litres and litres of sugary water won’t do you that good. It is good to get a bit of energy from that, but also a bit from water to keep you more hydrated. So yeah, just a few sips here and there and you should be good.

Now when you go to thinking about a whole day tournament these can be really long. I know I used to play in grand prix and you might arrive at the venue at 8 AM, and if you make it into the final in the second event in the afternoon, you can end up playing the final at 8 PM. So you can actually be in the tournament hall for 12 hours and maybe you’ve got 12 or 14 matches throughout the day. Its important that you drink loads of fluids. 5 litres, maybe even 6, throughout the day.

If you think that a normal day you are recommended to drink 2 litres throughout it, but you’re going to be sweating out so much more when you’re playing. I think you would at least need to double your liquid intake on long tournament days. Just make sure to be drinking fluids and if you don’t want to be drinking that much in between games of a match drink at the end of each match.

Now when it comes to food this can be really difficult at a long tournament as you have got to peak at lots of different matches. So you have to get the balance right between eating enough and over eating. I feel like this is something that most of us have done at some stage throughout the tournament.

When I was a junior I would often eat a little bit in the morning and forget to eat throughout the day. It would come to the late afternoon or early evening when you’re getting into the semi-finals of your events and I would just be really fatigued and I think that was really just down to not eating enough for the amount of energy I was expending. And terrible performances would follow.

But similarly it is really easy to go and buy a big sandwich and then decide to just eat all of it and then your name gets called out and you’re immediately playing a match. You’ve just eaten a massive sandwich and they are expecting you to play.

So try and go for small meals, if you could call them that. Taking a load of pasta in a tub could be a great idea because you can have just a little bit of it and just put the lid back on throughout the day. I know from my experience that most players don’t worry too much about being healthy or eating healthily when they are at a tournament. Its more just making sure that they are eating something.

Crips, biscuits, fruits, pasta and little sandwiches… Things like that. Looking to eat maybe 200 calories at a time instead of a 500 calorie meal, but making sure to do that throughout the day. Stay away from fatty and greasy foods or spicy food; anything that would leave you not feeling 100%. You want simple stuff like plain biscuits, fruit or bread. Simple carbs that give you energy and not do anything iffy.