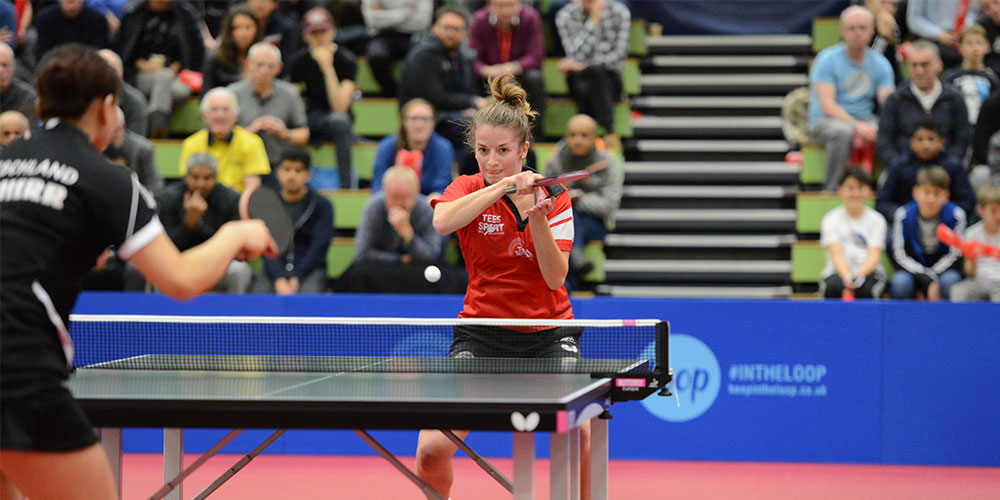 This is Episode 026 of the Ask a Table Tennis Coach podcast. Today’s question comes from Ed and is all about how to counter loop a sidespin loop.

“One of my opponents loves to do side spin loops and I often miss the ball when I try to counter loop. It’s hard to predict how sharp the ball will curve and often times I’ll simply block instead of counter looping to keep the ball on the table. Blocking is easy, but I want to counter loop just like I would against a normal top spin loop. What can I do to be better at this?”

First things first, there are two types of side spin loop. You’ve got the hook and the fade. And if you have two right hand players playing a hook loop is going to break wide into their forehand. This is because what they are doing is they are hooking around the outside of the ball with the spin. A fade loop is going to break into the middle, into the crossover, because they have gone around the inside of the ball.

You can do both kinds of side spin loops, some will go from the outside with the hook or from the inside with a fade and you can do that on your forehand or your backhand. Now this kind of curve that’s going on with the ball by the sidespin being added can be quite deceptive and as Ed says here can force you to just go for a block because you feel that’s safer instead of trying to counter loop.

But if you want to be a top player and you’ve got someone looping at you you’ve got to be able loop back and put a bit of pressure on them. So Ed, you’re right, really important that you need to counter loop this ball. So what can you do?

This is one of the situations where you see a lot of players get stuck in a negative cycle. Because you experience something different or difficult maybe in a match and you try and just do your normal attack, and miss, then next time you feel a little scared. So you decide to play it safe and go for a passive shot and then that becomes your ingrained behaviour, that when you see something that you’re not sure about you just end up playing safe and get stuck doing that. Then every time you see side spin loops from then on you always just end up blocking them, instead of attacking.

So it’s really good Ed that you’re trying to overcome this and learn how to attack and you’re not satisfied with just blocking the ball.

Now the skill of actually being able to predict how sharp a ball is going to curve and where it’s going to land on the table; that kind of concept is talked brought up a lot in Matthew Syed’s book, Bounce. If you haven’t read that yet I can definitely recommend that to all table tennis players. He talks a lot about the idea of queue reading and reading the signs of what your opponents doing.

It really is no good if someone’s telling you how much the ball is going to break or trying to explain it to you. Definitely not on a podcast or you haven’t even got video. What you really need to do is just go out and experience that as much as you can in person, and learn through the process of trial and error. Trying to attack, and if you miss not going for the block, and continuing to try and attack until you have got it right.

That can be a little bit embarrassing especially if you’re trying to do it in matches and the ball is breaking away and you’re doing air shots and stuff. That’s why it’s a great idea to do this in practice matches or in drill or try and come up with some training or do it with a coach, where you can feel a little bit more relaxed.

Repetition and quantity are the key to most things you are going to learn in table tennis. Most people think they have given something plenty of time but you’re not going to pick things up in just one training session. You need to be doing these over and over. Maybe after seeing loads of different types of opponents play thousands of side spin loops before you subconsciously know how much the side spin on the ball and where the ball is going to land. From that you’re body and your bat will be able to instinctively go to the right place because your brain will see and read the queues and will happen without you even having to think about it.

That takes time and if you only experience those shots occasionally they are just going to always bamboozle you when you come up against them. You need to be doing some regular practice, at least once a week, where you’re specifically working on these kind of things.

For you, Ed, I think you can find some players that are good at these type of shots and then try and find a way to get them to use it against you in games. One idea that I had was asking slightly better players if they’d like to do say 5 minutes of loop to loop with you. Because everyone enjoys doing loop to loop rally’s and it’s a perfect opportunity to throw in some hook and fade side spin loops.

If you could just go around and start asking players if they would do that with you and encourage them to use side spin loops, if they can do that. I think that even players that are at a much higher level than you would probably be quite happy to do that just because it’s fun.

That will give you the opportunity to see the side spin loops and start to, in your head, put together the understanding of how much spin has been put on the ball. A top player will look at someone playing a side spin loop and they will just know how heavy the side spin was, and they’ll adjust instinctively. Well as if you haven’t seen it that is what you’re going to struggle with.

So go out, try and do that. Don’t try and over-analyse things and just relax and play some great loops yourself and don’t worry about missing. Just let your brain naturally soak in everything that’s going on with the loops. That’s probably the best way to learn when you’re coming up against stuff like this.

I hope that helps, Ed, and good luck trying to counter those side spin loops. Just go put that into practice.