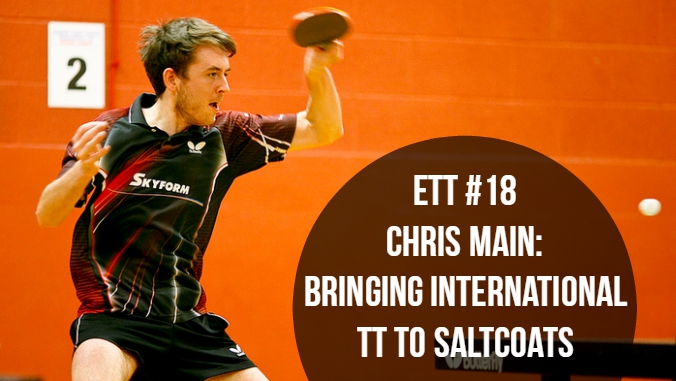 Chris Main is the head coach of North Ayrshire Table Tennis Club, a thriving club located on the West Coast of Scotland in Saltcoats. Saltcoats is a small town about 45 minutes away from Glasgow but Chris is on a mission to transform it into a hub of table tennis activity.

The club has won the Scottish National League four years in a row, is home to a number of top junior and senior Scottish players, and recently hosted the first round of the prestigious ETTU Cup (which is basically the UEFA Europa League of table tennis). On top of that they have a professional website and logo, host the North Ayrshire Open each year, and have managed to secure funding from Sport Scotland and the local council. Basically, they are doing everything right!

With so much going on at the club I thought it would be a great idea to get Chris on the show and find out a little more about his story and his plans for the future of the club, and Scottish table tennis in general. We talk about a whole range of different topics so there is something for everyone in this interview whether you are a player, a coach, or someone involved in running a club and promoting the sport of table tennis in your area.

Thank you so much for joining us. I really hope you enjoyed the show and learned a lot from listening to Chris. It was great to have the chance to talk about so many different aspects of table tennis and hear Chris’s views and opinions. We really need more people like Chris in our sport pushing the boundaries and creating growth and value.

After recording the interview North Ayrshire TTC released the following professional highlights video of the ETTU Cup they hosted back in August. It’s an amazing video and gives you a better idea of what Chris was talking about in the show.

It’s fantastic to see so many spectators and it’s obvious that the club did a brilliant job promoting and hosting the event. We need much more of this kind of thing. More buffets and alcohol at table tennis fixtures. Let’s turn table tennis back into an event and a spectator sport again instead of just cramming as many players into a hall as possible a few weekends a year!

As I said last week, The Expert Table Tennis Podcast is on track to have its most popular month ever. As I write this we are on 3,782 downloads so far this month and I know that we can reach the 5,000 mark before the end of September if we have a really big push.

So please would you help to make that happen by subscribing on iTunes, leaving us an honest iTunes Podcast review and sharing The Expert Table Tennis Podcast with your friends and followers on Facebook and Twitter using the links on this page. I really appreciate your help!

Next week I’m joined on the show by Jesper Ratzer, the world champion and world number one at Racketlon. That is an episode not to be missed! Thanks for listening. I’ll see you in a week’s time.