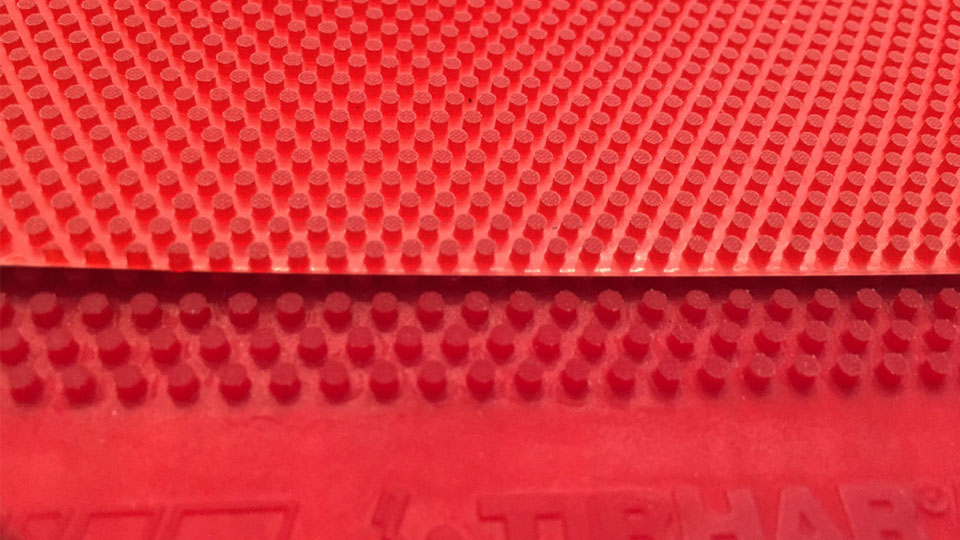 This is Episode 044 of the Ask a Table Tennis Coach podcast. Today’s question comes from Steve and is about the difference of short and long pimples.

“I’ve seen a trend as for a number of modern defenders using short pips compared to long. Does one have a distinct advantage over the other? Certainly I’d think short pips have the advantage for easier surprise blocks and counter hits but beyond that, mainly chopping, how do they differ?”

I always like to start questions about defending and pips with a disclaimer that I really don’t know what I’m talking about. I’ve never used long pips and I haven’t coached any serious players that use them either. With that in mind here are my thoughts.

Firstly, choppers are struggling in the modern game. We all know that. It’s not easy to be a chopper anymore. You need to be able to attack as a chopper because otherwise you’re going to spend the whole game on the back foot hoping your opponent is going to miss.

That’s why modern defender tend to have an attacking rubber on one side of their bat, pips on the other. So they’re using a combination bat instead of just long pips on both sides and they are attacking and defending, instead of just defending.

Starting with long pips. I guess the main advantage of long pips is that it’s the easiest to chop and defend with. You’re able to get away with not reading the spin that well and not having the best of feeling. Because if people are giving you loads of heavy spin you can just chop it back and your bat is going to deal with a lot of the incoming spin.

Another big advantage is if people are giving you really heavy top spin when you’re chopping back it’s going to turn into really heavy back spin. Which is going to make it loads more difficult for the attacker. That’s something you don’t get so much with the other rubbers.

Finally, you can do loads of different and weird stuff with long pips. Maybe this isn’t really textbook but if you’re up to the table, or close to the table, you can do weird jabs and pokes while attacking them a bit. They really confuse your opponents and give you points which you aren’t going to get with other rubbers.

The main disadvantage of long pips is that it’s really hard to attack. You’re not going to be doing any loops or open-ups, anything like that. It’s even quite difficult to hit flat, punch or smash. Long pips are definitely not suited to attack a ball.

The other thing about long pips is that it’s quite difficult when you’re giving loads of no-spill balls like float balls. So my tactic against long pips is to basically do float serves and no-spin serves. Rolling the ball and go for a smash once it comes up high.

You don’t need to be doing all these spinny loops against long pips because that’s what they want. You can get away with just rolling the ball and playing flatter then just hitting flat hard when you want to win a point. There’s no point feeding long pips spins.

The problem is if you’ve got long pips and people are feeding you no-spin it’s very difficult for you to generate spin yourself. The game because a flat/float game then your attacking opponent is free to smash you around whenever they want.

Moving to short pips. I think the biggest advantage they give is the amount of options you’ve got. You can still chop with short pips and you can go back from the table and defend with them but it’s going to be harder to do than when you’re using long pips.

On top of that you can loop with short pips, create your own spin on the ball and smashing. I guess the problem with short pips is that they are a lot easier to play against. They generally play similar to your standard reverse attacking rubbers. So people aren’t going to be surprised with what’s happening. They might be a bit confused by the ball coming off a bit flatter but that’s about it.

You’re not going to get many points by confusing people and being a bit different.

The other thing I wanted to say is that you can chop with anything. So you don’t need long pimples to be a chopper. You can go around chopping with Tenergy if you wanted to. It’s going to be more difficult but you can teach yourself to do it.

When it comes to short pips you should be able to chop well with them. You’re just going to need to develop slightly better feeling because short pips are going to be a lot less forgiving than long pips. If you’re chopping and you get the angle slightly wrong that ball is not going to get at the table.

Certainly have a go at using both. I think it would be worth trying them out and it’s probably good for teaching you some control and feeling too. See how they work for you and you’re definitely going to want to master twiddling as well even if you’re using short pips.

They key is to do the twiddling quickly and become a real master of it. If you’re not good at it then it’s going to mess you up even more.