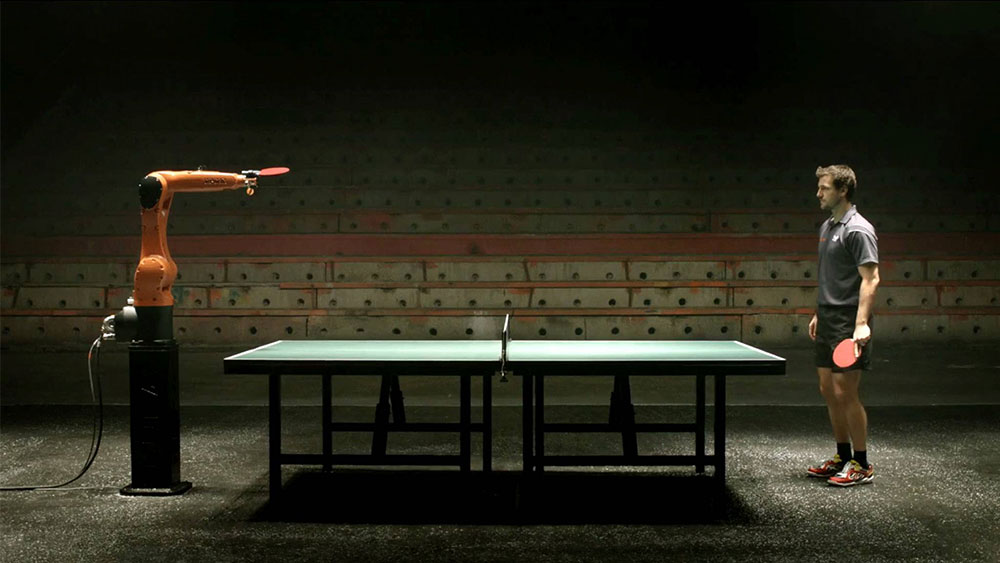 This is Episode 004 of the Ask a Table Tennis Coach podcast. Today’s question comes from Rex and is all about how to choose a table tennis robot.

“I’d like to get a robot so I can practice my strokes and also for my kids to use. What do you think would be a good robot? Is the Butterfly Amicus a bit of an overkill or is the Robo Pong 2050 more than enough for my needs? ?” I like the recycling options on both but also like the different spins in between the rallies of the Amicus offers”

Well this is actually a question that I get asked a lot and I mean this exact question. People asking about the Butterfly Amicus and whether they need to spend so much money on a robot, if it’s worth it because the Butterfly Amicus is a very very expensive robot. The Amicus Professional is a top of the line model, it’s close to 2000 pounds I think, 2000 dollars, or in that kind of ball park which is an awful lot of money. Especially when you consider there are some really cheap robots, kind of that I Pong series of robots that you can buy for just kind of 100 – 200 pounds, 200 dollars, in that kind of price range. So it’s kind of 10 times more expensive than some of the cheap ones. So is it worth it? That’s a question I get asked a lot.

In reply to your question Rex, specifically think about the Amicus and the Robo Pong 2050.

I’m going to start to talk about the Robo Pong 2050, this is a robot that has been around for quite a long time now. I know that Samson Dubina, one of the top players in America, trains a lot with his Robo Pong and swears by it. So it is a very decent robot by all means.

It comes in at around the 800 dollar marks so it’s an expensive robot but it’s no where near as expensive as the Amicus and it can do a lot of stuff. It’s got a memory you can store drills and is a bit more of a computer type thing then the kind of traditional old robots where it’s just a couple of buttons that you press but it’s able to remember the drills and able to create patterns for you. So if you’re looking for a robot to practice your shots and get it to do you back hand middle, back hand wide those kind of drills I think the Robo Pong 2050 is a really brilliant machine.

The one thing that it can’t do, I think this is what you are asking Rex, is switch between different spins in a rally or in a drill. This being said, if you want two top spin balls and three back spin balls to randomly happen in the rally, the Robo Pong will not be able to do this.

The new G Robo Pong 2050 is able to do that, its can give you back spin and move it around and able to give you top spin and move it around. But it’s not able to quickly switch between the two just because it is a one headed robot so you need to manually change the spin and stop and start again. The good thing about the Amicus is that it’s actually got multiple heads so it can shoot back spin, top spin kind of one after another straight away with no need to change things then you can just program all in.

So in terms on which robot to buy I think that really comes down to what you are looking for. You are paying a big premium for the multiple head feature, basically.

I think the features that are different is that the drills can be 6 balls long on the advance and 8 balls long on the professional but I don’t see that as being deal breaker and I think the professional has got more storage space for extra drills and stuff but you can probably get away with getting the Amicus Advance if you’re looking to get an Amicus.

So that’s the one I normally suggest to players but it is a very expensive robot still, I think the Amicus Advance is at least 1500 dollars or 1500 pounds, in that kind of area. So if you got a kind of money to spend that and you want the best then by all means go for the Amicus. I think the majority of players would be very happy with a new G Robo Pong 2050 but it is just something to bear in mind because if later on you do think of like that I wish I had the other one, you then paying for both robots. So it is something to think about.

I think robot training is really great idea Rex and I hope that you are able to find a robot that you like and that it really enhances you at your game. So good luck with that.

Thanks for asking a question and the one thing I want to say before I close out is have a look for something called Trainer Bot this is quite exciting. There’s a new robot coming out brought by some guys in America that could train a bot. It looks like it’s gonna be really good, I hope that it lives out to the hype.

I noticed there’s a few kind of well-known  table tennis coaches creating stuff for it and its got the ability to be kind of controlled by an app on your phone so that looks really cool. I think they had a kick start campaign or something for it a few months back. Have a search for Trainer Bot there might be something that interest you and I’m sure I’ll be speaking about that more in the future and hopefully I can do a proper view or something when it comes out and it’s on sale.