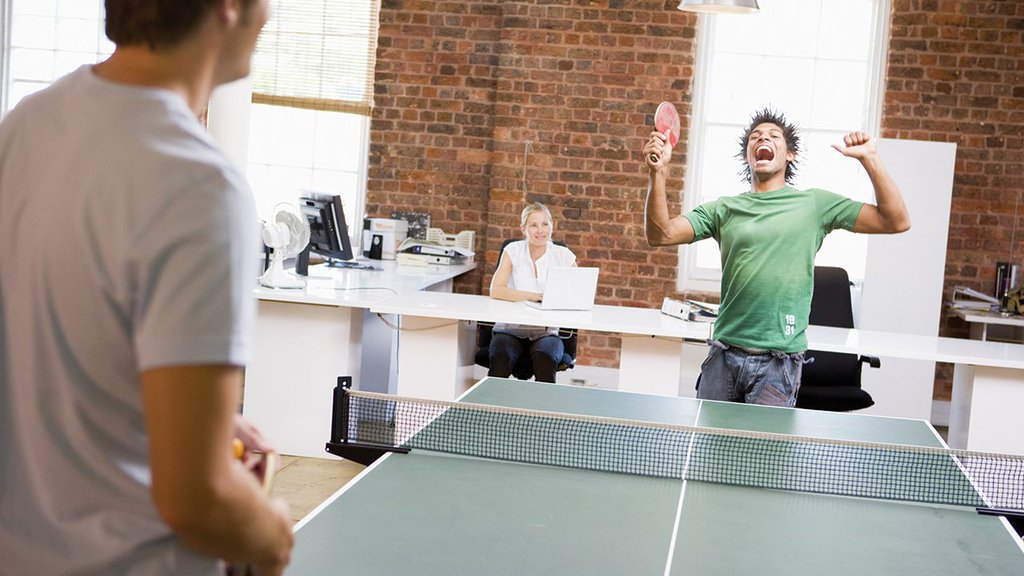 Over recent years, workplaces have become “trendy”. There has been a movement away from grey boredom and towards colourful fun – spearheaded by companies like Google and Innocent Smoothies. This has inevitably lead to office table tennis tables popping up all over the place!

Recently, I’ve been receiving loads of emails from table tennis players who have started playing the sport at work. The exact questions they ask me varies from; “Do you offer private coaching?” to “Which racket should I buy?” to “What is the best way to hold my bat?”, however, the root of the email is usually the same.

The real question they want answering is “How can I beat everyone in my office at table tennis?” The coaching, racket, and grip are simply potential strategies for achieving that dream.

I’m assuming that if you’ve found your way to this article you have similar ambitions. Great! You’re in the right place. My name is Ben Larcombe, I’m based in London, and I’ve been coaching table tennis professionally for the last five years.

Follow the advice on this page – and commit to doing a bit of extra practice – and I’m sure you’ll be table tennis king of the office in no time.

I’ve got three very important tips to share with you in this article but, before we get to that, we need to discuss equipment.

If you are serious about improving your table tennis skills you need to invest in a proper table tennis bat. The majority of recreational players assume that all rackets are the same but, unfortunately, this just isn’t the case.

In fact, chances are you’ve never even encountered a “proper” table tennis bat.

I recommend going for the Palio Expert 2, which is a brilliant allround table tennis racket, with tacky rubbers, a free bat case, and sold at a very reasonable price.

Using a “proper” table tennis bat is honestly hugely important. It allows you to use the correct strokes and techniques and move away from “tap-tap” ping pong.

You’ll need to be playing with a decent racket in order to benefit from the following three tips.

We like to split people up into attackers and defenders.

Would you define your own table tennis style as aggressive or passive? Do you try and win points with your own killer shots or off of your opponents mistakes?

At the recreational level (and by recreational I mean you aren’t competing in official table tennis leagues and tournaments) consistency is king.

The key to success is keeping the ball on the table for longer than your opponent.

Office table tennis is often filled with a lot of bravado as certain characters try to impress people with their huge smashes and risky shots. However, most of this is what we would call “minus EV”.

What that means is for every wonder shot you get on the table, that wins you the point, you are probably missing twice as many.

Instead, you should focus your efforts on consistency (not missing) and placement (which, if used correctly, will force your opponent to miss).

This is all pretty straightforward.

Try and play with control and don’t worry about hitting the ball too hard. Aim your shots at three spots on your opponents side of the table; wide forehand, wide backhand, and the middle/transition point between forehand and backhand.

There is absolutely no reason to play balls into the middle of the forehand and backhand half of the table. This is your opponent’s prime hitting zone.

By far the easiest way to win a point in table tennis is to force your opponent to put the ball into the net. This can easily be achieved if you master the art of generating heavy backspin.

Most recreational players are used to hitting balls that have either a little bit of topspin or no spin at all. They have trained their muscle memory to play strokes based on this fact. Add heavy backspin into the mix and they won’t have a clue what to do.

The trick is to slice completely underneath the ball. This is called a push.

Now, this isn’t possible if you are playing with a rubbish racket. Try to slice completely horizontally under the ball with a cheap bat and the ball will simply skid straight over your rubber.

However, do this with a “proper” bat with tacky rubbers and they will grip the ball and send it back to your opponent with loads of backspin.

When your opponent uses their typical stroke to try and hit this heavy backspin ball they will watch the ball go straight into the net.

Generate enough backspin and their shot might not even make it to the net. It will shoot straight down and hit their own side of the table!

Heavy backspin might not make you Mr. Popular in the office but it will certainly increase your chances of winning matches.

Over time, your workmates will learn to adjust to varying types and amounts of spin and you’ll all be playing “better” table tennis because of it.

My final tip for beating everyone in your office involves creating a handful of “tricky” serves.

Most recreational players simply start off the point with a generic “rally” serve and don’t see the importance of using your serve to your advantage.

Your serve is the only point in a game of table tennis where you have complete control over the ball and aren’t reacting to what your opponent has just done. That make it hugely important!

This will certainly win you a number of points outright against opponents that can’t handle heavy backspin. It will also stop big attackers from being able to kill your serve.

Another great serve to develop is a fast serve. The key here is to do some service practice on your own until you are able to really crank up the speed without sending the ball long off the end of the table.

Once you have mastered how to serve fast (and I’ve got some great tips for that here) it is all about placement. Remember the three zones we spoke about in the consistency section; wide forehand, wide backhand, and the middle.

If you can serve fast into those areas you are making it really difficult for your opponent to play a decent shot. Hopefully, they will miss or return poorly and you can look to win the point with a well placed next shot.

What Works for You?

Everyone has their own tactics and tricks for winning points. I believe that the three I’ve mentioned above are fundamental and a very good place to start.

However, I’m sure that there are loads of others.

Leave a comment below and share what works for you with other players looking to dominate their office table tennis table.

And… if you are serious about improving your table tennis and dedicating the necessary time to mastering the sport then please check out How to Play Table Tennis in 10 Days.

How to Play Table Tennis in 10 Days is an accelerated table tennis course that will systematically teach you the proper fundamentals of table tennis technique in ten simple steps. It’s the fastest way for beginners to learn how to play table tennis.