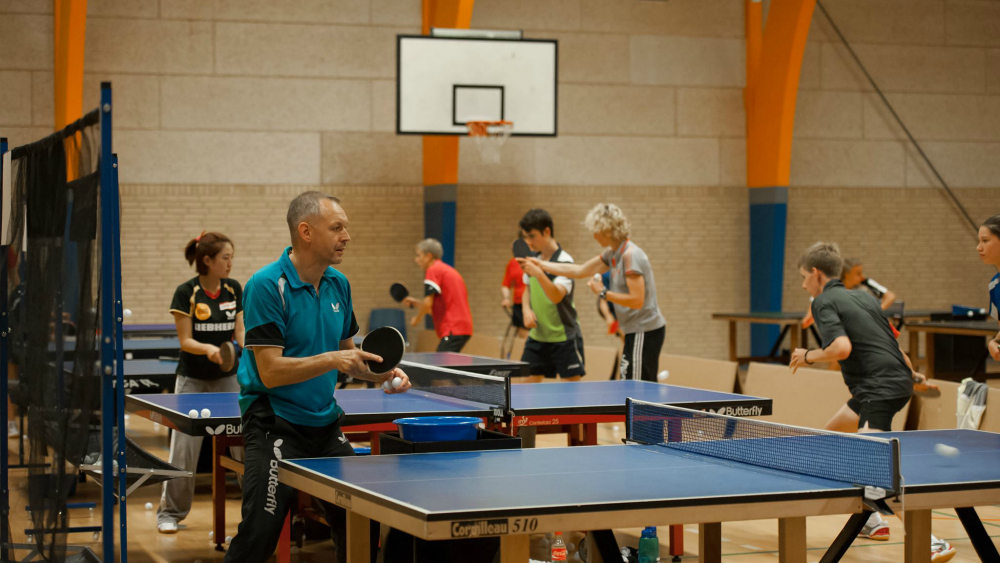 I first attended the B75 Table Tennis Camp (held in Aalborg, Denmark) back in the summer of 2011. I believe that was only the first or second time it had been run. It wasn’t particularly “international” back then – everyone spoke in Danish or Swedish and we couldn’t understand a word they were saying!

Since then the camp has grown rapidly in both quality and popularity, with plenty of British players now attending every year. Also, a few years back they decided to make English the official language of the camp.

I have been on a fair few training camps during my 15+ years playing table tennis, both in the UK and abroad, and I can honestly say that the B75 Table Tennis Camp is the best experience I’ve ever had.

Players return year after year to experience it again and get the benefit of training in such a positive atmosphere and alongside so many truly world-class coaches. Many of the coaches work with their respective national teams and/or have been internationally ranked players themselves.

One of the many brilliant coaches on the camp is Istvan Moldovan. He is a former world top 100 ranked player for Norway, coaches the Norwegian national team, and is a sports psychologist. He featured on The Expert Table Tennis Podcast back in Episode #11. Click here to listen to that.

I visited B75 for a second time in 2014 and brought with me Sam Priestley (the guinea pig in The Expert in a Year Challenge) and we both had an amazing time and improved our table tennis considerably. You can read Sam’s review of the camp here.

Lars Rokkjaer, the organiser, has just emailed me over the invitation for the 2016 summer camp and, once again, I couldn’t be happier to recommend this training opportunity to players of all levels and abilities.

Want to learn more about this summer’s camp? You can download the full English invitation by clicking the image below.

I know that in the past a number of ETT readers have attended the camp and really enjoyed it. Perhaps if you are thinking about going this summer, or have been before, you might like to leave a comment below. That way it might seem less daunting to sign up and go alone.

If you have any questions about the camp I would be more than happy to answer them or alternatively you can give Lars an email and speak to him directly. He is very good at replying to emails.

This summer (2013) I recommended the camp to several ExpertTT readers and all had a fantastic time meeting other players and increasing their level of play.

One such ExpertTT reader that traveled over to Denmark for the camp was Bruce Majors from the United States. Bruce was kind enough to write a short review about his experience at the training camp to give you guys a better feel for how it all works…

The B75 training camp was overall a great experience. Lars and his crew were very accommodating, especially with me traveling all the way from the USA. Good variety of coaches and I seemed to be matched up with those that would best help me. The format of the camp is very much based off of positive encouragement, morning training in small groups with lots of one on one time, then afternoon sessions with 10-12 players. A journal was kept and gone over with your coach to go over areas of work in your game and that seemed to help me, I made sure I took a lot of notes. I was impressed with the level of coaching as well

I want to experience other camps but I would go to this camp again. Great comradery between the coaches and players. I would say I didn’t know exactly what to expect prior to attending but came home with great friends and a great experience. I would highly recommend attending the B75 camp.