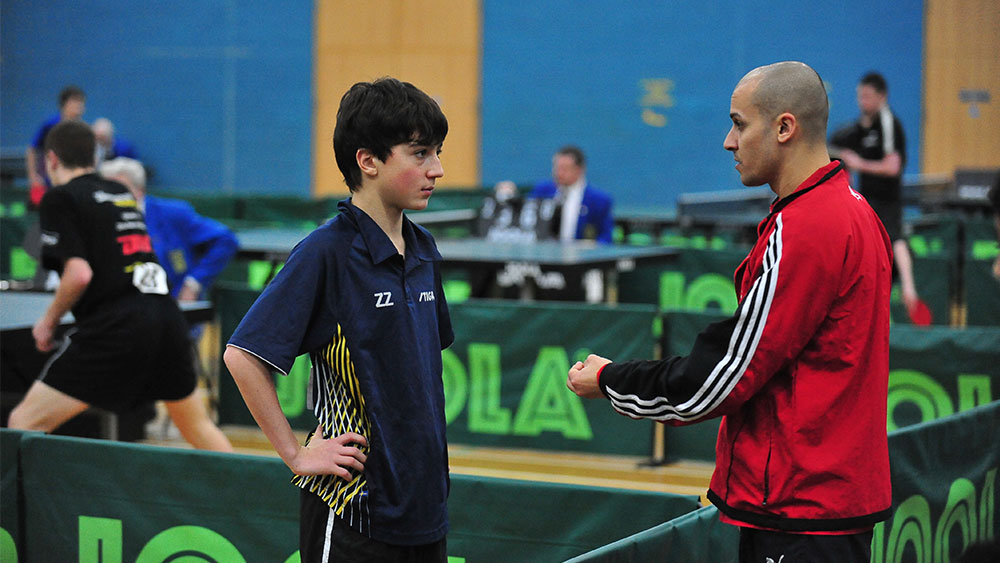 This is Episode 006 of the Ask a Table Tennis Coach podcast. Today’s question comes from Neil and is all about how to adapt to the coaching rule change.

“Hi Ben what are your thoughts on the rule change that allows coaching during a game?”

So for those of you that aren’t aware of what’s been going on the ITTF has brought in a new rule from the 1st of October 2016.

Now from before you could only receive coaching in between the games, or if you took a time out. So that was the time you could go over to your coach have a chat get some tactics and come back to the table. Now players are actually allowed to receive advice at any time in the game except during rallies, it says. Obviously you can’t have people shouting out what to do during the rally but apart from that anything goes as far as the ITTF is concerned. So it’s fine to get advice in between the points as long as you’re not holding up play.

What are my thoughts? To me this is a classic case of trying to simplify something but making it more complicated.

Basically coaches often used to try and give advice to players during the game, illegally, I guess it would be. That’s very hard to stop. To make sure umpires enforce that, pick up on it, and actually do anything about it is hard enough as is.

Instead the ITTF have kind of thrown their hands in the air and said “Fine you can all give advice during the game, we don’t mind anymore, as long has you’re not holding it up you can shout things out and go and get extra bits of advice.” They think that it’s great because there is no more having to worry about coaches cheating and giving people yellow cards for doing hand signals.

It has been weird for a while. Sometimes you’re coaching someone and you kind of look across and think “Should they be saying that? Are they going a bit too far?” The idea is that this will clear it up, but as far as I’m concerned this is just going to get way more complicated.

To prove it here’s some stuff from the ITTF guidelines that really show you how far this rule has gone and all the extra stuff that they’ve had to create to make it make sense. Here are some examples.

So lets say a player goes over to their coach very quickly to get some advice in between a rally, is that ok? Well the ITTF says yes. But what if a player kind of obviously makes a detour to go over to their coach while they’re picking up a ball. Well in that case its time wasting, which is misbehavior, which is I assume a yellow card offense. What if the player goes to pick up the ball but it looks like they are moving very slowly to pick up the ball so that their coach can give them some extra advice. Well that would also be time wasting.

But how on earth are we supposed to define if they are moving very slowly or not, it’s ridiculous.

If the ball goes out of the court and a player goes to retrieve it and the other player decides to use that time to go and talk to their coach, is that allowed? Yes that’s allowed. But what if when the other player comes back to the table the player that was talking to their coach also isn’t back at the table. While that’s technically time wasting.

But how much time are we allowed to have here as kind of leeway. What if it takes 2 seconds from the time the other player is back at the table before you are finished talking to your coach? Do you have to stop mid-sentence? Are you going to give yellow cards for all of these things? Or are you just going to give a warning and are players going to push it as far as they can?

As far as I’m concerned this is ridiculous. It’s going to make enforcing things a million times worse for the umpires because it’s still a completely grey area and it’s going to be down to umpires and referees to determine if the coaches and players are taking the mic or not. And believe me some people are going to take the mic.

Nothing has really changed. It’s just that instead of someone occasionally giving a tiny bit of advice “Good, good, keep it on the backhand”, now it is going to be someone going over and talking to their coach for too long. I’m glad I’m not an umpire, that’s what I would say about that.

How can you make the most of this? Try and get advice from your coach as much as possible I guess. If you were a coach before and something was going wrong you would think “I wish I can tell them something. I can either use a time out to tell them something, or I’ve got to wait until the end of the game to actually give them this thing.”

Let’s say I see that the opponents changed their serve and its having a really big effect and my player needs to do something else. I used to have to wait for ages to tell them that, now I assume I can just shout it out in between a point or they can come over. Try and come over to your coach as much as possible I guess if that’s something that you’re able to do without disrupting.

I saw that Samson Dubina put something on Facebook about wearing an earpiece so that the coach can kind of talk to the player like that. I think he was also trying to make the point that is getting a bit ridiculous. Just use it to your advantage. There’s no point in not using the coach if you’ve got one and everyone else is doing it. So the rules say that now you can talk to your coach as much as possible. Go for it and if you’re a coach try and give as much advice as possible as long as you’re being helpful.