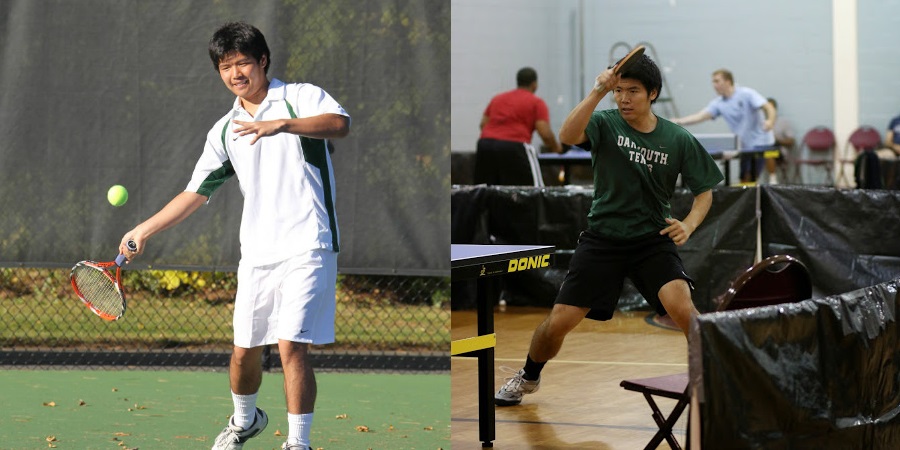 The following post was adapted from an email I received from Bryan Song, an Expert Table Tennis reader and follower of the Expert in a Year challenge.

Bryan has a great story to tell and finds himself in a fairly unique position; being able to describe the experience of transitioning tennis skills to the table tennis table. I found his journey fascinating and thought it was worth sharing with you. If you have a table tennis story you’d like to share with us at Expert Table Tennis please get in touch.

My name is Bryan Song and I just recently came across your amazing project, Expert in a Year. I’ve always been captivated by the interplay between “nature” and “nurture” (i.e. genes/natural talent vs. environment/coaching). Needless to say, I’ve read your blog front-to-back since I first encountered it via a Facebook friend a couple of days ago. You’re clearly a very thoughtful and motivated person, and I, like many others, enjoyed following along with you and Sam as you worked towards your goal.

Anyway, I’m writing to you because in your closing post, you mentioned that you would be interested to hear about how a tennis player or a boxer would fare in a challenge similar to Sam’s. While I’m not a boxer, I am a U.S. collegiate level tennis player, who has been at it for over 20 years (starting at age 5), and just recently picked up table tennis about 2 years ago.

How it all started

I first encountered competitive table tennis in New Orleans, Louisiana, when I was playing tennis at an indoor facility with a friend. You see, there’s a decently sized club in New Orleans that uses a tennis court three nights a week for table tennis play. I saw two 2200+ level players playing on the court next to me and my interest was piqued. I joined the club that night.

Thanks to tennis I had always been a decent ping pong player, so I felt like I could be competitive. I was summarily humbled by everyone in the club. I realized quickly that I needed to make a huge commitment to beat even the worst players there.

I acquired a $125 blade and a set of $40 rubbers and struck a deal with the man in charge of the club: I would give him tennis lessons in exchange for table tennis lessons. My initial efforts were awkward. Like every novice, I was completely bamboozled by spin, and my footwork was a mess. Tennis failed miserably to translate to table tennis except for in one area: my forehand.

While the two strokes are certainly very different, there’s enough in common for a tennis player to more readily pick up the table tennis forehand. Weight transfer, contact, and the general understanding of low-to-high, all helped me to develop a reliable loop early on. I clung to this like a life vest, building my entire game around my forehand. My serve was garbage, my backhand was awful, I had no idea how to return serves, and I couldn’t block for my life. Still, I was having a blast picking up the sport.

I played my first tournament after a few months and got handily beaten by everyone except a racketball player and a little kid who was also just starting out, putting me at a USATT rating of 1002. Rather than getting discouraged, I had such a great time at the tournament that I knew I wanted to take this even more seriously. Everyone I played was nice and fair, and I really appreciated the lack of age and gender divisions – it was a meritocracy in the purest sense.

I went back to the drawing board and started practicing in earnest. Where before I would play once or twice a week, and I’d do the lesson exchange once or twice a month, now I was playing four to five times a week with as many lesson exchanges as I could manage. I watched YouTube videos obsessively and I video taped my stroke on a regular basis. I carried my paddle to school and practiced my stroke while studying in the library.

One of my biggest regrets regarding my tennis career was that I didn’t take the sport seriously until it was almost too late (12 or 13). Back then, my practices were lackadaisical, and I picked up bad habits early that have stayed with me forever. With table tennis, I brought the maximum amount of focus and intensity that I could, and I was constantly asking others how I could get better. Meanwhile, my tennis rackets sat in a corner gathering dust.

When I played my next tournament four months later, I went up 322 points to 1324. I got a trophy for getting second place in my division; I couldn’t remember the last time I was so giddy over a cheap piece of plastic. I’ve played 10 tournaments in the span of 2 years, and I got as high as 1823.

Of course there were starts and stops, and some tough losses in there as well, but I’ve made a great group of friends at the New Orleans Table Tennis Club and in the table tennis community at large. Plus, whenever I travel I seek out lessons from good coaches in the area. I visited San Francisco and got a lesson at the famous ICC, and every time I go back home to Birmingham, Alabama I get lessons from a great coach there.

Anyway, here are some thoughts I’ve had about my transition from tennis to table tennis:

That being said, I’m not sure that I can credit tennis with everything. Sure I came in with decent hand-eye coordination, but I found in the early going my tennis form interfered with my table tennis stroke (and vice versa). This is no longer a problem, but I wonder if any gains I had from tennis were nullified by this issue. While I’m pretty quick, I think that any decently athletic 25 year old is pretty quick – you don’t need 20 years of tennis training for that. Also, while I did get up to 1800 in under two years, which I’ve been told is difficult to do, I’m not sure it’s impossible to do. I’d venture to say that Sam is at or will be at that level soon.

Still, I’ve definitely improved rapidly relative to some of my peers, and I credit two things for it, some of which I’ve alluded to earlier: 1.) practice intensity and 2.) an eye for the game. The first one is obvious: when I practice, I make sure I’m practicing with a purpose. I focus very hard on the adjustments I’m making while continually reassessing my progress through outside perspectives and video-taping. The second is related although a bit more subtle. I feel like my experience playing countless tennis matches has allowed me to readily pick up patterns in table tennis. This insight has helped me understand the strengths and weaknesses of my game, which in turn heightens my awareness during practice and in matches.

Unfortunately, in the last nine months or so I’ve had much less time to practice due to academic demands. Along with that comes the effect of the law of diminishing returns. The better I get, the harder it is to improve, and the tougher the competition gets. Of course I’m still committed to getting better. I still watch YouTube videos relentlessly, I still train with the highest intensity I can muster, and I’m even planning a trip to Beijing this summer with my first coach where we’ll get to practice at the Chinese National Training Center thanks to the connections of one of our members.

Ultimately, I think that tennis may have accelerated my table tennis growth a little, but more important were the lessons I learned about hard work and mindful training (as you rightfully note in many of your blog posts), which you can pick up from any good coach or just life experience in general.

Every sport has its learning curve, and sheer athleticism can only get you so far. There are no shortcuts!